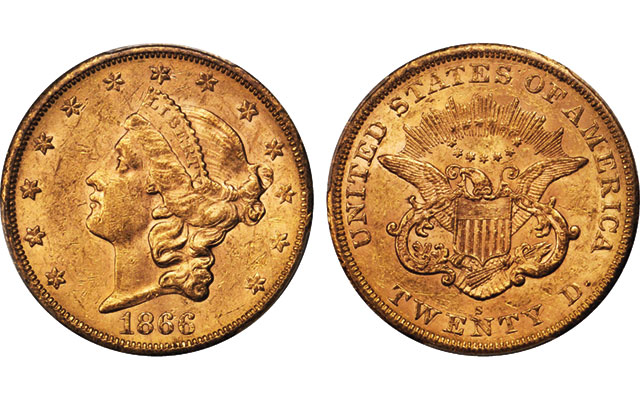 No more than 200 examples of the 1866-S Coronet, No Motto gold $20 double eagle are believed to exist from among the 120,000 coins reported struck at the San Francisco Mint.

Most of the survivors encountered are in no better than Very Fine to Extremely Fine condition since production entered circulation quickly and the coins experienced significant wear in commerce.

One of the surviving coins, a piece graded and encapsulated Mint State 60 by PCGS, is among the 2,756 lots to be offered Feb. 5 and 6 by Stack’s Bowers Galleries in the firm's February 2015 Americana Auction.

The public auctions sessions will be held in Stack’s Bowers’ galleries at 110 W. 57th St. in New York City.

Additional lots are being offered Feb. 10 by online bidding only.

1866 coin production at the San Francisco Mint began before new reverse dies bearing the With Motto designs arrived from the Philadelphia Mint, where the dies were made.

1866-S production yielded No Motto Seated Liberty silver half dollars, and Coronet gold $5 eagles, $10 eagles and $20 doubles eagles from the old reverse dies, until the new reverse dies were delivered.

More information on the 1866-S Coronet, No Motto double eagle can be found here.

Full details on the Stack’s Bowers Americana Sale can be found here.