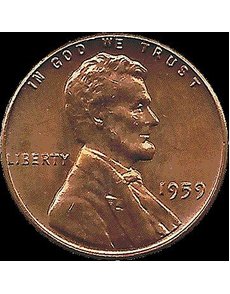 This 1959 Lincoln cent is from one of three rolls the author bought some years back. Its buying power, and certainly any hope of investment return, is greatly diminished as a result of the number of coins hoarded.

Buying rolls of coins: Why on God’s green earth we ever thought they’d be worth anything above face value is beyond me now.

But at the time — 50 and more years ago — it seemed to make sense. We even had history on our side, or so we believed.

In the late 1950s and early 1960s, collectors weren’t content with just one example of a coin. Better a roll than a single coin. Better a bag than a roll.

The profit potential of one coin could be magnified through the power of multiplication.

Shipping added to the cost of putting away rolls and bags, but history showed profits would soon accrue. Anybody with A Guide Book of United States Coins by R.S. Yeoman could see that.

All you had to do was buy a roll or bag of new coins and wait.

Somewhere in my attic is a box filled with rolls of 1964 Jefferson 5-cent coins that I persuaded my father to “invest” in.

He’s long dead. The coins’ value pretty much is, too. Today, a roll catalogs for $3.50 — less than half its 1964 purchasing power. And, in truth, it would be hard to find anyone willing to pay much more than face value.

Too many were saved. The coins will never be valuable. Enough are stored away to satisfy demand for centuries to come.

That’s the trouble with hoarding. If it’s hoarded, it’s not rare, no matter how long you wait.

I’ve got three rolls of Uncirculated 1959 Lincoln cents on my desk now. I bought them years ago as part of a larger lot and never bothered to get rid of them. They speak, though, to that crazy period of hoarding.

The rolls’ original owner put them up in plastic rolls (which were 10 cents each, as I recall) and sealed them shut some 54 years ago. The coins have toned to an orangish color and for the most part exhibit a typical 1950s mushy strike.

Today, 1959 rolls catalog for about $2.50, but mostly sell for a dollar or so — enough to buy not much of anything anymore.