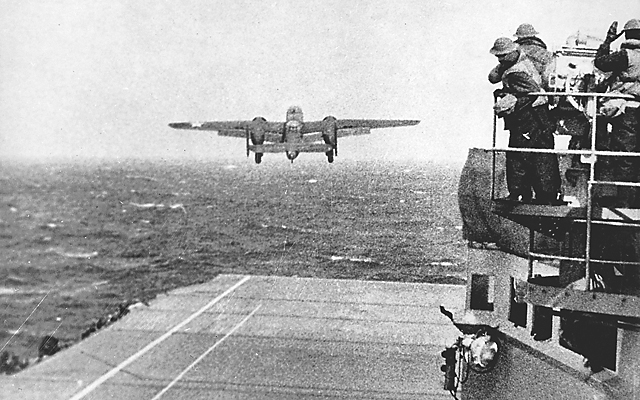 Suggested theme for obverse design for Doolittle’s Tokyo Raiders’ congressional gold medal is a Mitchell B-25 bomber taking off from the flight deck of the aircraft carrier USS Hornet on April 18, 1942. 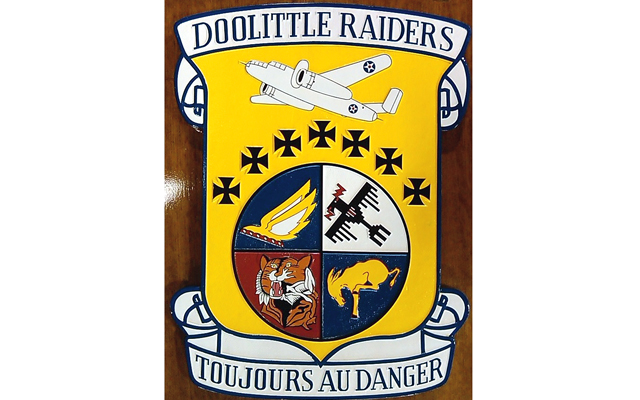 One recommended theme for proposed reverse designs is the Raiders Crest that comprises elements of the patches of the four squadrons from the 17th Bombardment Group that participated in the raid on Tokyo.

With the four surviving members of Doolittle’s Tokyo Raiders in their 90s, time is of the essence to have designs executed for the congressional gold medal honoring their heroic contributions recognized and the medal presented, says Raiders liaison Brian Anderson.

Anderson made his impassioned plea during a July 8 Citizens Coinage Advisory Committee teleconference in which he presented the themes the four Tokyo Raiders preferred for obverse and reverse designs.

“We’ve got to get this done as quickly as possible before we lose them and it’s too late,” Anderson said.

Anderson shepherded the enabling legislation through political channels. Along with his wife, he visited all 435 congressional and 100 Senate offices seeking the sponsorship for what would eventually become Public Law 113-106 on May 23, 2014.

Anderson said the four Tokyo Raiders were in agreement that for the obverse they would prefer seeing an iconic rendering of the aircraft carrier USS Hornet with one of the Mitchell B-25 bombers taking off from the flight deck en route on its mission to bomb the Japanese capital and Honshu Island on April 18, 1942.

The obverse design should also include 16 stars, one each for the 16 planes and their crews. The recommended obverse inscription is DOOLITTLE TOKYO RAIDERS — FIRST STRIKE BACK.

The four surviving Tokyo Raiders did not believe their mission would have been successful without the support of the U.S. Navy and the crew of the Hornet, who had no idea what the mission was until the vessel put out to sea, Anderson said.

As a lieutenant, Cole was Lt. Col. James H. “Jimmy” Doolittle’s co-pilot in the lead plane. The crew had to bail out as the aircraft ran out of fuel and eventually crashed. Doolittle, Cole and the remaining three men in the crew were rescued by the Chinese.

For the reverse, Anderson says the four surviving Tokyo Raiders indicate they prefer representation of elements in the four squadron patches from the 17th Bombardment Group that formed Doolittle’s Tokyo Raiders for the Raider Crest.

Also recommended for inclusion in the reverse design is a side or partial view of a B-25 model; a French inscription, TOUJOURS AU DANGER, which translates into English as “Always into Danger”; ACT OF CONGRESS 2014; and 17TH BOMBARDMENT GROUP.

The raid led by Doolittle was the first joint action involving the U.S. Army Air Corps and U.S. Navy.

The 80 men who volunteered for the 16 planes, with five-man crews, went into the mission knowing the odds were strong against them surviving the missions.

The mission was designed to inflict physical damage on the Japanese capital and damage the morale of the Japanese population after the Dec. 7, 1941, attack on U.S. forces at Pearl Harbor.

Upon completing their mission, the Tokyo Raiders flew on in an attempt to reach areas of China that were still unoccupied by the invading Japanese.

One aircraft, critically low on fuel, flew to Russia where its five crewmen were held as prisoners until they escaped 13 months later. Two crewmen drowned when their aircraft was ditched in the South China Sea. Thirteen aircraft crash landed — one crewman died on bailout and eight were captured by the Japanese.

Three of those captured were executed, one died of disease and the remaining four were held prisoner and tortured until the end of the war. Thanks to the heroic efforts of the Chinese, the remaining 64 evaded capture.

Thirty-four airmen stayed in the China-Burma-India Theater for varying lengths of time. Five of them were later killed in action and some of the remaining airmen went on to fly in the European/Mediterranean Theater. By the end of the war, 17 of the original crew were dead.

The USS Hornet was sunk during the Battle of the Santa Cruz Islands on Oct. 26, 1942.

Full details of the mission and the plane crews can be found here and here.

The design themes were presented to the U.S. Mint’s engraving staff and the U.S. Mint Artistic Infusion Program for execution of proposed designs.

Proposed designs will be reviewed by the CCAC and Commission of Fine Arts, with their recommendations then presented to the secretary of the Treasury or designate for final approval.