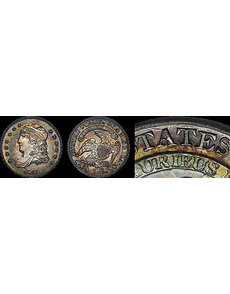 The LM-1 1837 Capped Bust, half dime shown has evidence of die clashing on both obverse and reverse. Close-up image of the word STATES on the reverse shows the clashed date digits underneath.

Everyday life at the first Philadelphia Mint was conducted to the rhythmic thumping of the presses. Every now and then, a sickening clang was heard. This was the sound of the dies coming together without a planchet in place.

The resulting damage to the die or dies is called a “clashed die.”

During the manufacturing process, hardening the dies was a difficult step that was achieved in a somewhat random manner. “The die ... was hardened by the following process,” according to Don Taxay in U.S. Mint and Coinage. “It was first heated to a bright cherry red, a delicate operation since excessive heat would cause even good-quality steel to shatter. The die was then immersed in a large cistern of cold water and swished back and forth to cool. ... The die was [then] removed from the water. It was now, however, not only hard but very brittle, and so it was tempered in another vessel of water which was slowly boiled.

“When heated throughout, the die appeared almost deep blue. It was then removed and allowed to cool slowly.”

The workers at the Mint used visual color as an indicator of the temperature of the die steel, a nonscientific approach that was the best they could do at the time.

This process caused each die to be tempered to a slightly different hardness. Some were brittle and tended to crack, some were soft and wore quickly, and some became workhorses as they were more perfectly manufactured.

When two dies clashed together, the harder of the two would impress part of its image into the field of the softer die. These indentations in the die(s) would become the raised clash marks on the coins we see today.

Clash marks can be found in each of the Bust series we collect. The half dollars tend to show the defects more clearly due to their size but some of the smaller coins can be the most spectacular.

Are you interested in seeing the date on the reverse of a Bust coin? If so, look for an 1837 Capped Bust dime, LM-1 (Federal Half Dimes 1792-1837 by Russell Logan and John McCloskey).

The quarter dollar series has a very famous and interesting clash on the 1818 Browning 9 (Early Quarter Dollars of the United States 1796-1838 by A.W. Browning). You can clearly see the arrowheads sticking out from the back of Miss Liberty’s cap.

Numerous half dollar marriages have readable parts of E PLURIBUS UNUM visible between the date and the bust. A few also show the arrowheads behind Liberty’s head.