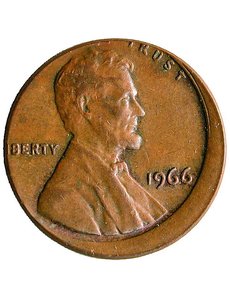 This Lincoln 1966 cent was struck by a horizontally misaligned obverse (hammer) die. The coin was struck in-collar and the reverse face is perfectly centered. 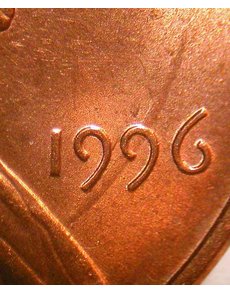 This 1996 Lincoln cent shows the result of a horizontally and vertically misaligned (tilted) die clash. The clash mark is from the edge of the field portion of the reverse die and the adjacent letters er (from america). 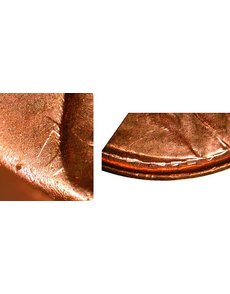 This 1960-D Lincoln, Small Date cent has a tilted die clash. The incuse, mirror-image letters d states can be seen behind and below Lincoln’s bust.

The 20th and 21st centuries are studded with numerous spikes (and drops) in the production of specific error types. These spikes affect numerous categories of die, planchet and striking errors.

Some surges in striking errors are easily explained. The year 1966 produced numerous rotated die errors (mostly 90 degrees) among Jefferson 5-cent coins. The vast majority can be traced to a single malfunctioning press.

Lining up a quartet such errors, I was unable to match up the patterns of die scratches. Each coin was clearly struck by a different die pair; how many different presses were involved cannot be ascertained.

Equally puzzling is the failure to see a similar error pattern in other denominations struck in 1966. Except for some rare instances, coinage presses are not dedicated to a specific denomination. Once the production totals for one denomination have been satisfied, the dies, collar and feeder assembly are changed to accommodate a different denomination.

Error production patterns confined to a single denomination are actually quite common and can stretch over several years.

In the July 12, 2010, “Clearinghouse” column, I reported on a nine-year run of Lincoln cents with faint, oddly positioned clash marks (see photo of 1996 cent here).

The clashes all occurred when the hammer die was tilted and horizontally misaligned to a remarkable degree — up to 50 percent. They’re so different from ordinary clash marks that it seems likely the mishaps occurred during installation rather than during a press run. Restricted to the years 1992 to 2000, the current count is 19 die pairs. Again, it’s unclear why the same mishap failed to occur when these presses were switched to other denominations.

An error production pattern can even be confined to a single design subtype. In the Jan. 3 “Collectors’ Clearinghouse,” I reported on research conducted by Robert “BJ” Neff on tilted die clashes found in 1960-D Lincoln, Small Date cents (and one 1960 Small Date cent). An example of the 1960-D cent is shown here.

A tilted die clash occurs when the hammer die makes direct contact with the anvil die at an angle, leaving a set of reciprocal clash marks at one pole on each die. Such clashes are quite rare — except in this subtype.

At the time of writing, 35 such clashes have been cataloged, with at least 15 waiting in the wings for cataloging.

While examining more than 5,000 Small Date cents from both the Philadelphia and Denver Mints, Neff noticed some other intriguing patterns. Not a single conventional die clash (which produce the familiar “Lincoln in jail” effect) was found. Many of the dies from both Mints were covered by heavy die scratches, regardless of whether clash marks were visible. Die scratches are the product of intentional die abrasion, performed to remove clash marks and other types of superficial damage.

Neff also detected a high frequency of “conflicting dies” (switch-outs). These examples show clash marks on only one face; the opposite die was replaced before the press was restarted.

Neff thinks that the presses responsible for the tilted die clashes and other effects were plagued by a number of problems: 1) difficulty in maintaining a horizontally oriented hammer die face, 2) difficulty in maintaining the minimum die clearance necessary to prevent a clash in the case of a planchet misfeed, and 3) an abnormally high rate of complete planchet misfeeds.

Neff thinks it’s possible that a different kind of press was used, or that a standard press was modified for the production of these Small Date cents. Whatever the changes, they didn’t work out very well and the experiment was abandoned.

Neff’s scenario only works if we surmise that the novel press design was used strictly for the small date cents. It also raises the question of why the cent design was modified after the experimental presses were abandoned. Conjecture aside, his evidence at least calls into question the standard explanation for the switch to the Large Date subtype — a propensity for die chips to develop in digits of the small date.

Further details of Neff’s investigations can be found at www.maddieclashes.com.