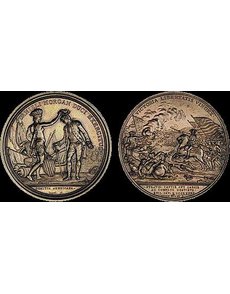 This 1781 Daniel Morgan at Cowpens medal, struck from the original dies, depicts one of the most important battles of the American Revolution. The battle scene on the reverse inspired the designs of several War of 1812 medals and continues to be popular.

“Seldom has a battle, in which greater numbers were not engaged, been so important in its consequences as that of Cowpens,” wrote Supreme Court Chief Justice John Marshall in his biography of George Washington.

A little over 1,000 men on each side fought at Cowpens, a pasture on the frontier of South Carolina.

It was January 1781, and American forces in the South were on their heels after the terrible loss at Camden, S.C., and the British capture of Charleston.

This fairly minor battle, in a far flung corner of the 13 states, changed the face of the Southern Campaign, hastening the end of the American Revolution. The action only took about an hour, but in that pivotal time span, American forces under Gen. Daniel Morgan managed to capture some of the finest British soldiers in the field and embarrass the hated Banastre Tarleton.

Tarleton, without most of his forces, retreated to Yorktown, Va., where American land forces and French naval power closed in on him and his commanding officer, Lord Cornwallis.

To recognize the battle’s importance, the Continental Congress authorized three medals: one in gold for Morgan, and silver medals for Lt. Col. John Eager Howard of Maryland and Lt. Col. William Washington of Virginia, each with different obverse and reverses.

The obverse of the Morgan medal depicts an Indian princess, symbolizing America, crowning the victorious general with a laurel wreath. The Morgan medal reverse depicts a battle scene.

Howard’s troops collapsed Tarleton’s line with withering musket volleys and captured his cannon with a deadly bayonet charge, while William Washington’s cavalry put the remaining troops to the chase.

The Daniel Morgan at Cowpens medal is one of the great medallic masterpieces of the American Revolution, executed by Augustin Dupré. The original gold medal was lost in a Pittsburgh bank robbery in 1818, after which copy dies were produced in 1839, closely echoing the detail of the original. Copies are avidly sought today.

The original Howard medal survives in the collection of the Maryland Historical Society, and strikes from the original dies appear frequently in the market.

While William Washington’s original medal is not traced, bronze examples struck at the Paris Mint from the original dies appear frequently in the marketplace.

Accomplished by Benjamin Duviver, the obverse of the Washington medal depicts the cavalry charge that sealed the victory.

The medals of Cowpens make for a handsome three-piece set that can be acquired by patient collectors.