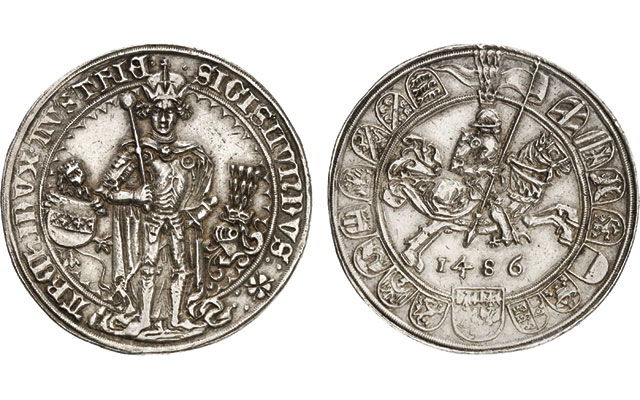 The dollar may be synonymous with the United States but is actually rooted in Austria.

The Hall Mint was the birthplace of the original taler, which evolved into the Maria Theresa taler and later served as the inspiration for what would eventually become the most famous monetary unit in the world, the U.S. dollar.

In 1477 the official mint for Tyrol (now in modern Austria) was moved to be closer to rich silver mines. The silver allowed Archduke Sigismund von Tirol to reform the monetary system by replacing some traditional gold coins with silver coins. This resulted in the minting of the first silver guldiner in 1486, which “replaced” the old gold gulden.

The new coin was immediately popular and was copied all over the region and spread throughout Europe. The guldiner, called the joachimsthaler in Bohemia, soon became known simply as the thaler (German) or the daalder (Dutch), and would evolve into dollar.

For further details about the sale, visit the firm’s website.