1792 half disme stars in Heritage auction 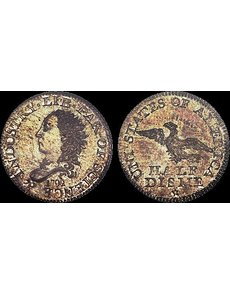 A 1792 half disme graded Specimen 67 by PCGS garnered a final price of $1.41 million in the Heritage Auctions Platinum Night sale Jan. 10 in Orlando, Fla. 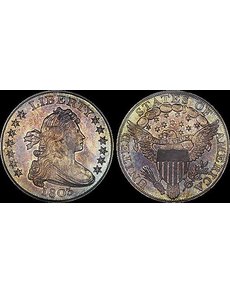 The second highest priced lot in the Platinum Night auction is an 1803 Draped Bust dollar graded Proof 66 by PCGS. The coin sold for $851,875.

The third-highest price was an 1838-O Capped Bust half dollar graded Branch Mint Proof 64 by PCGS. The piece sold for $734,375 with the buyer’s fee.

The top lot was a 1792 half disme graded Specimen 67 by Professional Coin Grading Service that realized $1.41 million.

As of Jan. 10 when online bidding closed, the half disme had an online bid of $1 million and carried no reserve, meaning that a price of at least $1.175 million was guaranteed with the 17.5 percent buyer’s fee considered. When it crossed the auction block, it sold to a floor bidder for a final bid of $1.2 million, or $1.41 million with the buyer’s fee. The final price was not that much more than the $1,322,500 that the same coin brought when last offered at a Heritage auction in 2006, but a big price nonetheless.

The coin’s importance was well established by the lengthy catalog entry that featured a quote from PCGS founder David Hall. Hall stated: “The coin is so exceptional that I believe it could very well be the first 1792 half disme struck, and thereby the first U.S. coin ever struck. It is certainly one of the most important coins PCGS has ever handled.”

The second highest priced lot was another classic early rarity: an 1803 Draped Bust dollar graded Proof 66 by PCGS. The lot description noted that it was only the second auction appearance of this example of just four examples known. It further stated, “It would be no surprise if this higher-graded 1803 specimen exceeds the $1 million barrier that its 1802 counterparts have flirted with in recent years.” That statement was perhaps optimistic as Internet bidding closed at a bit short of that, at a bid of $700,000 ($822,500 with buyer’s fee), but a floor bid of $725,000 was offered and the dollar sold for $851,875 (with fee).

Grabbing the bronze medal for the third-highest price was an 1838-O Capped Bust half dollar graded Branch Mint Proof 64 by PCGS. It is one of just nine examples traced and was the subject of a recently published monograph, “The Surprising History of the 1838-O Half Dollar.”

It seems that today no big auction is complete without at least one exceptional $4 Stella pattern, and this sale featured two, graded by NGC. An 1880 Flowing Hair $4 piece graded Proof 66 realized $440,625 while an 1879 Flowing Hair $4 piece graded Proof 67 Cameo with a Certified Acceptance Corp. sticker signifying exceptional quality for the grade went unsold and was available after the auction for $418,300.

The catalogers characterized the Stella’s lasting appeal aptly, writing: “Some coins just naturally stand out from the crowd, even in a well-dressed bunch such as the many memorable coins populating this Platinum Night offering. Not to diminish any other lots in this session, but the Stellas are at the top of many collectors’ ‘dream lists,’ even if they never even put them on their ‘wish lists’ due to their expense.”

Several other top lots failed to find new homes during the floor auction and remain available for purchase as of the morning of Jan. 11, including a 1793 Flowing Hair, Wreath cent graded MS-66 brown with a post-auction buy price of $329,000. Two rare silver dollars were both available at $293,750: an 1893-S Morgan dollar in MS-64 and a 1794 Flowing Hair dollar graded Extremely Fine 45. ¦