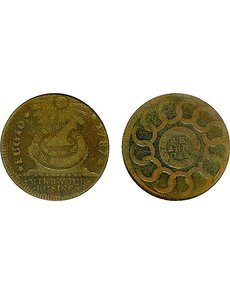 Minor corrosion on this 1787 Fugio cent does not diminish its story value. An example of the coin belongs in every collection.

Some coins belong in every collection — pieces that are modestly priced, that you can share with family and friends, captivating them with history and beautiful designs.

We’ve discussed several of these “storied” coins already, including the 1863 Civil War “Flag of our Union” token with the reverse motto warning that anyone who tears it down will be shot on the spot. Collectors collect the token for the motto, but I like the obverse image of the flag, curiously missing on so much of U.S. coinage.

In May we covered the 1837 German silver Feuchtwanger cent (really a token) used in U.S. commerce although not officially a coin. In April we featured Maundy coins distributed by English monarchs for centuries and most recently by Queen Elizabeth II on the occasion of her 85th birthday, which happened to fall on “Maundy Thursday.”

Of all the storied coins, none is more fascinating than the Fugio cent, authorized in 1787 by the Continental Congress.

I will not try to provide its history in the short space of a column. Suffice to say that books have been written about the various varieties and restrikes of this enthralling coin. Anyone interested in it should read Continental Currency of 1776 & Fugio Cent Varieties by Eric P. Newman, one of our most illustrious numismatists, profiled in the June 13 issue of Coin World. You can acquire Newman’s must-have volume online for less than $10 and pepper your stories about this coin with more specifics.

To begin with, the Fugio cent is known by several names, including the Franklin cent, as Benjamin Franklin purportedly played a role in the design and descriptions.

The reverse of the coin features 13 links of a chain, symbolizing the unity of the original 13 states, with generous fields around a circle containing the words united and states in a frame of the motto, we are one.

The obverse design is enchanting. Somehow it manages to cram several devices in a small space but balances them with fields to the left and right of a sundial in the center of the coin. The term fugio from the Latin, “I flee” (or “I fly”), is to the left of the sundial and the date, to the right, creating more balance. The beaming sun is at high noon. The sundial rests on a base that forms a foundation for the bottom motto, mind your business. That motto has double meaning, as in “take care of commerce” and “stay out of mine.”

Rarely in modern times do we collect coins because of their mottoes. Franklin was known for his maxims, including the famous “A penny saved is a penny earned.”

You’ll need about 30,000 “pennies,” or $300, to purchase a mildly corroded example — perfectly fine, if mottoes are legible — and many hundreds of thousands of cents to acquire a Mint State sample (readily available, thanks to a Bank of New York hoard rediscovered in 1926).

Pictured here is my Fugio cent, purchased for $207 in a Heritage auction. The corrosion is very minor. All the devices and mottoes are clear enough to entertain guests and introduce them to the history and artistry of our hobby.