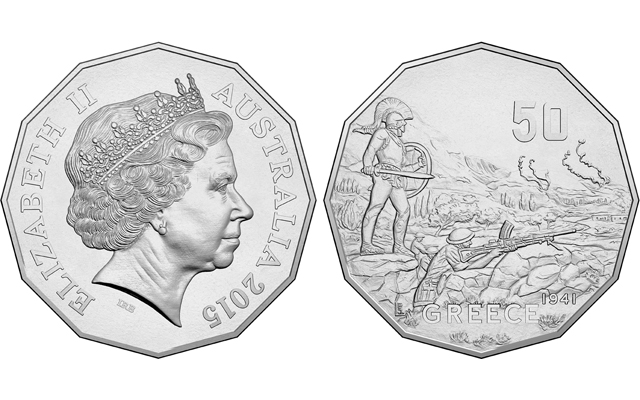 The Royal Australian Mint’s Australia At War series continues with a 50-cent coin for the Battle of Greece. 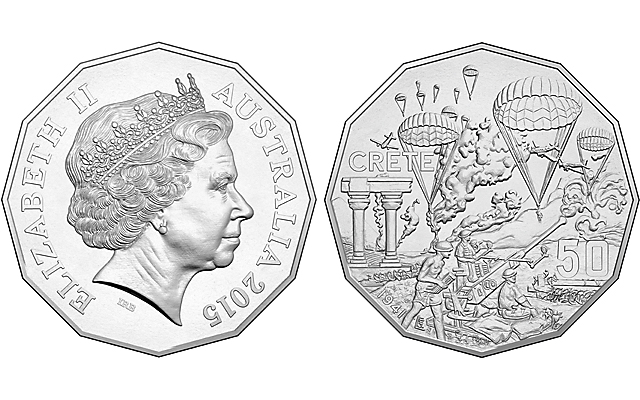 Another Australia At War 50-cent coin, also released May 4, marks the Battle of Crete. 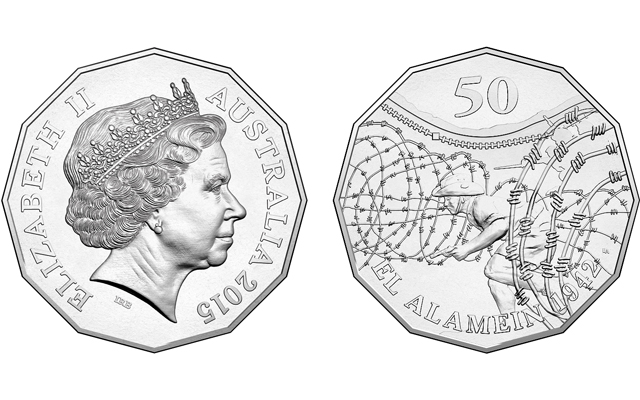 The Battle of El Alamein to defend North Africa is the subject of a 2015 non-circulating legal tender 50-cent coin from the Royal Australian Mint. 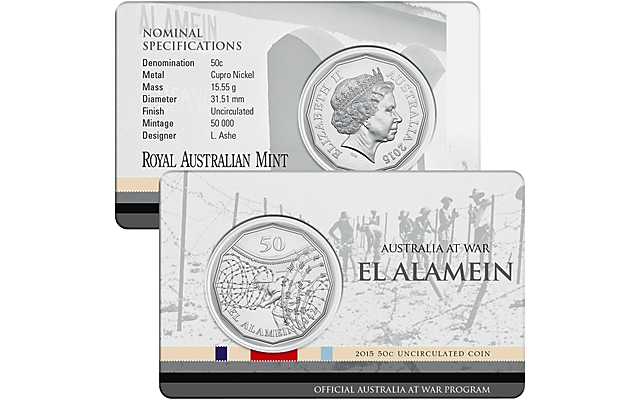 All of the newest 50-cent coins in the Australia At War series are presented in a colorful, informative card, like the one shown for the Battle of El Alamein.

As the 74th anniversaries of the Battle of Greece and Battle of Crete near, the Royal Australian Mint released two 2015 non-circulating 50-cent coins for the battles.

The copper-nickel coins were announced at the commemorative wreath-laying ceremony May 14 at the Australian Hellenic Memorial in Canberra.

During World War II, in 1941, Australian and Allied troops were sent to Greece, and the island of Crete, to assist in defence against the Axis forces.

British, Australian and New Zealand soldiers banded together to help defend Greece, but some 50,000 Commonwealth troops had to be evacuated and more than 3,000 Australians and New Zealanders were captured.

Many of the soldiers fighting to defend Greece withdrew to the island of Crete to sustain the Royal Navy’s garrison.

Despite their unified and desperate attempts to hold Crete, this costly action caused the troops to suffer heavily, according to the RAM's account of the battles. There were more than 7,000 casualties and more than 11,000 soldiers taken as prisoners of war, including 5,600 Australians.

While both battles ended in ultimate defeat for the Allies, the bond between Greece and Australia was strengthened, according to the Royal Australian Mint.

The ceremony included many representatives from the Greek and Cretan communities, including veterans who were involved in the battles and each was presented with their own keepsake, according to the RAM.

“The contribution and sacrifice Australians made, standing side-by-side with the Greeks in these battles, is an important part of common history between Australia and Greece and the Greek community are honored to see this story being remembered,” said Kalokerinos.

“The Cretan Federation of Australia and New Zealand is proud to be associated with this historic event that will enable current and future generations to remember and honour those individuals that fought an epic battle to ensure our freedom,” said Katheklakis.

The new coin designs are part of the Royal Australian Mint’s three year Australia at War series and each features an intricate design capturing the battleground with soldiers side-by-side in combat.

The Battle of Crete coin shows soldiers engaged in the fight both on land and by air, with ancient ruins and the flames of war in the background.

The coin for the Greece campaign depicts Commonwealth soldiers battling alongside an ancient Greek warrior.

The coins were actually released on May 4.

The release also includes a 50-cent coin for the Battle of El Alamein.

Using North Africa as a base, Axis forces sought to seize control of the Suez Canal and the oilfields of the Middle East. In 1942, the Allies’ fortunes began to change due to two significant actions in the Egyptian town of El Alamein.

In July, the Allies prevented Axis troops from advancing to Alexandria despite facing a heavy offensive. From late October until early November, Australian and Allied forces courageously broke the German and Italian lines, forcing their retreat, according to the RAM's account.

All of the coins bear the Ian Rank-Broadley effigy of Queen Elizabeth II.

The RAM partnered with the Australian War Memorial to develop all of the coins in this series and worked with historians for accuracy and use of imagery for designs.

Each is presented in a colorful coin card and retails for $10 Australian. The coins may be purchased through the RAM’s eShop.

For more information about the RAM’s Australia at War series visit a dedicated page at its eshop.