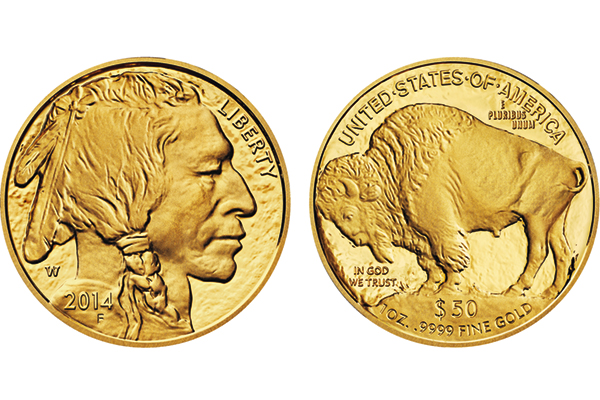 The Proof 2014-W American Buffalo 1-ounce gold coin went on sale May 8 from the U.S. Mint, the latest release in an annual series.

The coin went on sale with an initial price of $1,640. As with other gold and silver coins sold by the United States Mint, that price is subject to change as the price of gold changes on the London market.

The 2014 edition of the Proof American Buffalo 1-ounce gold coin has no set maximum mintage or household order limits, though the Mint will end sales once production capacity is reached.

The Proof coin is a collector version of the Mint’s annual bullion coin of the same design.

The 2013 edition has a preliminary sales figure of 18,954 pieces, with the 2012 coin selling approximately 19,765 pieces. Neither coin remains available from the Mint, and neither sales figure is audited and finalized, so each number is subject to change.

Sales for the coin have shown dramatic changes over the years, waxing and waning as collector/dealer interest in the coins changed, and the price of gold rose and fell.

The first Proof versions were sold in 2006 to the tune of 246,267 pieces, when collectors and dealers embraced the nation’s first pure gold coin (.9999 fine), which also happened to bear one of the most popular U.S. coin designs.

Sales dropped to 58,998 coins for the 2007 edition, with sales for the 2008 coin falling to just 18,863 pieces. An Uncirculated collector version was introduced in 2008, possibly siphoning off some sales; the final mintage of that coin reached 9,074 pieces. In addition, the Mint offered Proof and Uncirculated versions of tenth-ounce, quarter-ounce and half-ounce editions of the coin in what proved to be a one-year-only offering.

The coin’s 2011 sales showed another decline, to 28,693 coins. Gold prices reached record levels in 2011, topping $1,800 at times, possibly pricing the coin out of the market for some buyers.

The gold coin features the original James Earle Fraser designs from the 1913 Indian Head, Bison on Mound 5-cent coin — the profile of a Native American on the obverse with the inscription LIBERTY and initial F for Fraser, with the addition of the date 2014 and W Mint mark of the West Point Mint; on the reverse is the bison with the inscriptions UNITED STATES OF AMERICA and E PLURIBUS UNUM, along with IN GOD WE TRUST, $50, 1 OZ. and .9999 FINE GOLD.

The designs are virtually identical to Fraser’s original 1913 designs, though the motto with IN GOD WE TRUST — not on the 5-cent coins — had to be added to gold coins.

Each American Buffalo gold coin will arrive inside a matte-finished hardwood box and with a certificate of authenticity.

A fee of $4.95 will be added to all domestic orders for shipping and handling.