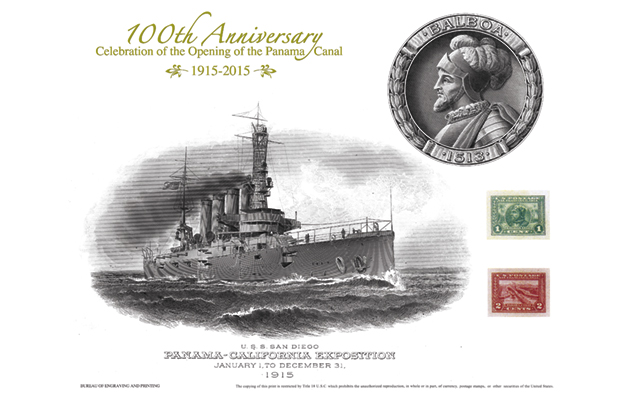 The Bureau of Engraving and Printing is releasing the second of three items in its Panama Canal Commemorative Intaglio Print Program on March 24.

The following is a release from the Bureau of Engraving and Printing:

The Bureau of Engraving and Printing is pleased to introduce USS San Diego, the second of three prints in the Panama Canal Commemorative Intaglio Print Program. The first day of sale is Tuesday, March 24. Sales will begin at 8 a.m. EDT. The print is priced at $22.50.

This intaglio print focuses on the 100th anniversary of the celebration of the opening of the Panama Canal. The USS San Diego print features a compilation of images representative of the 1915 World’s Fair in San Francisco and the 1915 Panama-California Exposition in San Diego. It also features two Panama-Pacific Exposition issued postage stamp images.

Here are descriptions of the images included on the intaglio print:

This print measures 8 inches by 10 inches.