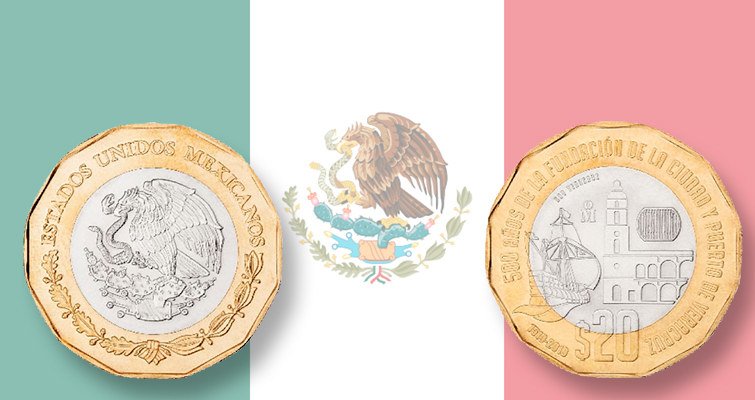 A 2020 circulating commemorative coin in Mexico honors the 500th anniversary of Veracruz.

Courtesy of the Bank of Mexico

A 2020 circulating commemorative 20-peso coin issued in Mexico celebrates the 500th anniversary of the founding of the port city of Veracruz.

The reverse side of the coin features images of the original Veracruz town hall (still in use as the municipal palace) and a 16th century ship reminiscent of the one on which Spanish conquistador Hernán Cortés sailed to the gulf coast in 1519. Wording translating to “500 years of the foundation of the city and port of Veracruz” encircle the coin’s perimeter.

Like all of Mexico’s coins, the obverse side of the 2020 coin features Mexico’s coat of arms — an eagle perched on a prickly pear cactus devouring a rattlesnake. Mexico’s official name, Estados Unidos Mexicanos, or the United Mexican States, is embossed on the top half of the coin’s obverse perimeter.

The new coin has security features that its predecessors of the same denomination don’t have, including a “micro-inscription” of 500 VERACRUZ and a “latent image” of the number 20 that can be seen only when the coin is tilted.

Made out of nickel, silver, bronze and aluminum, the coin is dodecagonal — it has 12 sides. The coin is slightly smaller, thinner and lighter than the completely round previously minted 20-peso coins.