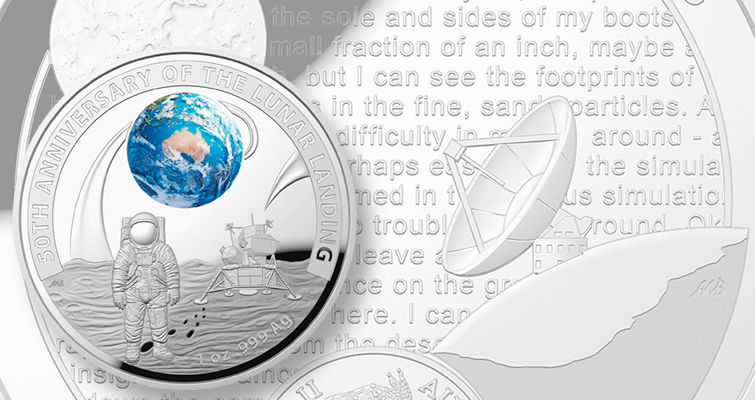 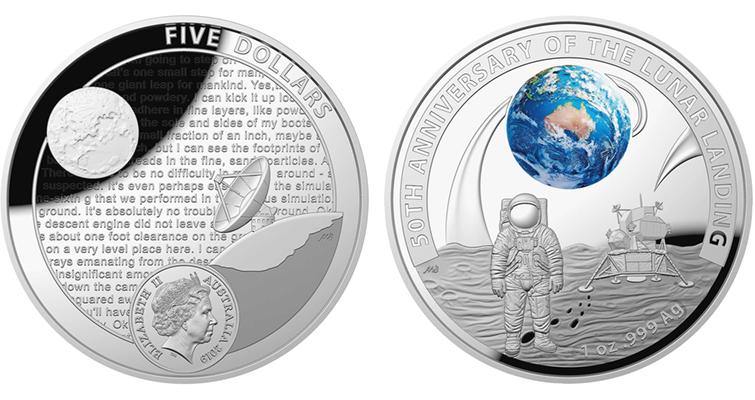 The reverse of the Australian $5 silver coin depicts a colorized rendition of plant Earth. 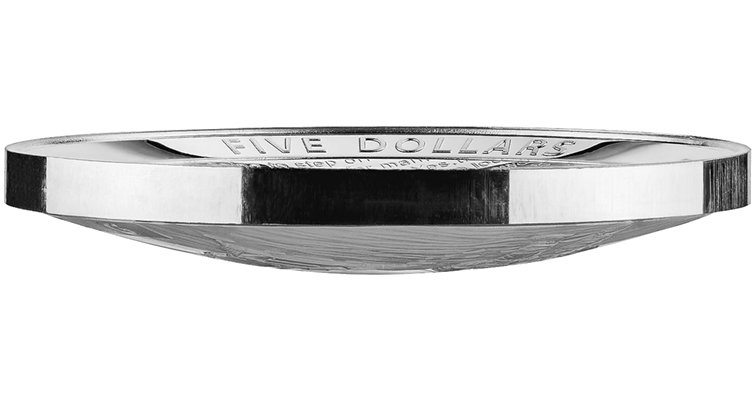 The edge of the Australian Moon landing silver $5 coin is plain. 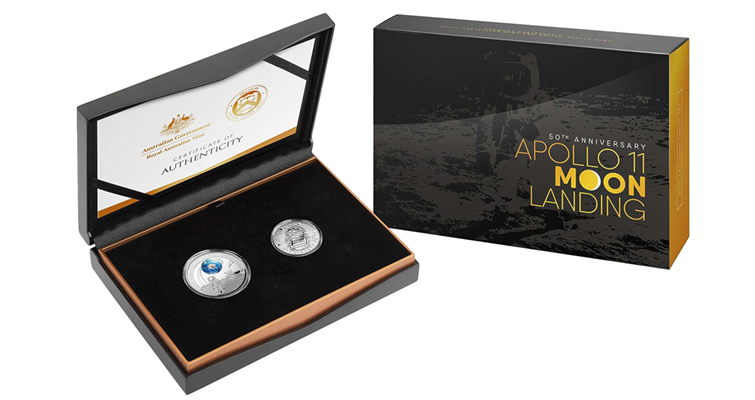 The two-coin set includes a certificate of authenticity signed by directors of both the U.S. Mint and Royal Australian Mint. 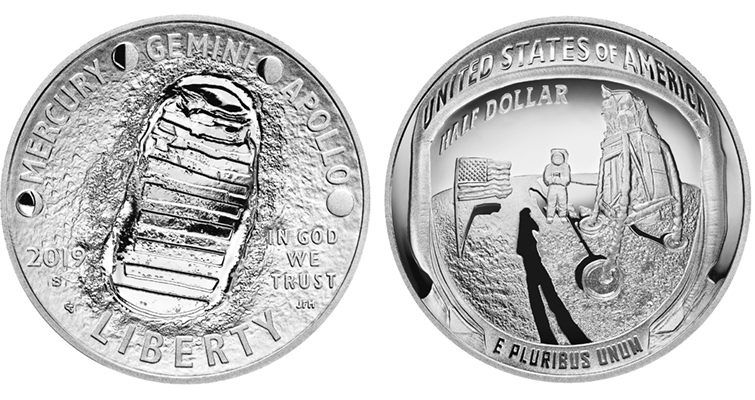 A two-coin set containing domed silver coins from the United States Mint and Royal Australian Mint to honor the July 20, 1969, Moon landing by American astronauts is now available from the RAM.

The set is being sold by the Royal Australian Mint, while the U.S. Mint promotes its sale on the U.S. Mint website and provides a link to the RAM website.

The obverses of both the U.S. and Australian coins are concave, while the reverse of each is convex.

The half dollar’s obverse features the inscriptions MERCURY, GEMINI, and APOLLO, separated by phases of the Moon, and a footprint on the lunar surface, which together represent the efforts of the United States space program leading up to the first manned Moon landing.

The coin’s reverse design presents a close-up depiction of the famous “Buzz Aldrin on the Moon” photograph taken July 20, 1969. The visor and part of the helmet of astronaut Buzz Aldrin are shown, where the reflection in Aldrin’s helmet includes astronaut Neil Armstrong, the United States flag, and the lunar lander.

The half dollar is offered individually by the U.S. Mint for $32.95, with $5 of the total reflecting a congressionally legislated surcharge.

The $5 surcharge is included in the sale price for each of the 10,000 Proof 2019-S Apollo 11 half dollars, which the Royal Australian Mint purchased from the U.S. Mint under a bulk discount.

The obverse of the set’s Australian $5 coin portrays Queen Elizabeth II facing right, at bottom center. In the upper left quarter of the obverse is a rendition of the Moon. A satellite station on the Earth’s surface is at bottom right. All the devices are imposed over a text of Astronaut Neil Armstrong’s comments to Mission Control as he described walking on the moon.

The reverse of the Australian $5 coin depicts a U.S. astronaut in the foreground with several footprints visible in the lunar surface behind. In the background is the lunar module, with a colorized rendition of Earth centered above.

The Australian 1-ounce .999 fine silver coin measures 39.62 millimeters in diameter and has a plain edge. The two coins are specially boxed, with a certificate of authenticity jointly bearing the seals of the RAM and U.S. Mint inside the lid of the inner box.

The two-coin set is one of several joint partnerships the U.S. Mint has forged with world mints, according to U.S. Mint Director David J. Ryder. Another joint partnership involving Apollo 11 coins is in the works with the Royal Spanish Mint. Ryder said the Mint is discussing joint products with the Italian State Mint and hopes to pursue ventures with Vatican City as well.

The U.S. Mint is also involved in a partnership with the British Royal Mint to jointly produce numismatic products celebrating the 400th anniversary of the Pilgrims landing at Plymouth Rock. The U.S. Mint is already considering production of a .999 fine silver medal and 24-karat gold $10 coin.