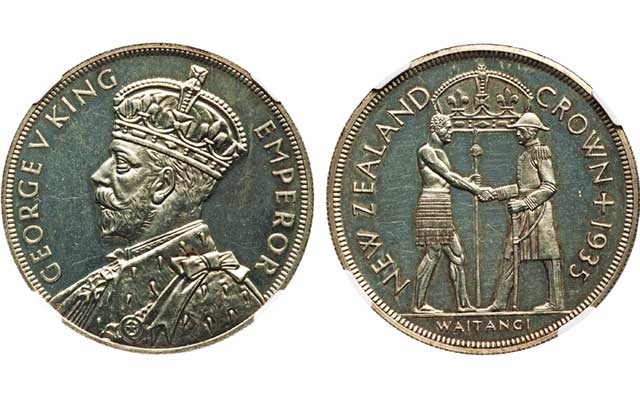 A Proof 64 Cameo example of the 1935 New Zealand Waitangi crown, graded by NGC, is being offered in an August auction from Heritage Auctions. 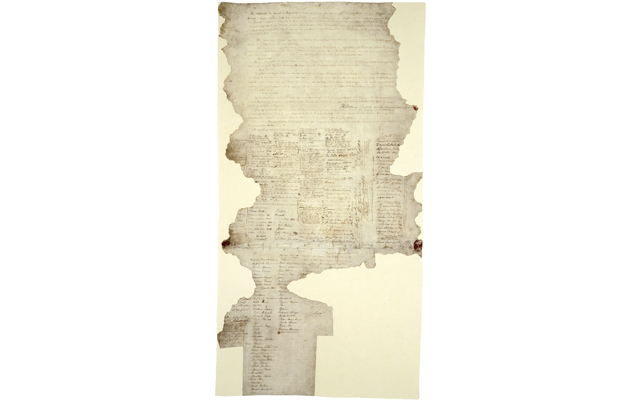 Though referred to as one item, the Treaty of Waitangi was actually nine separate documents signed by various tribes and representatives, and includes this example, known as the Waitangi sheet.

Great Britain’s colonial impulses knew few limits, and infamously placed the crown in conflict with natives around the globe.

In New Zealand, that pitted the English against the native Maori people, who eventually signed a treaty delineating terms of settlement and governing rights of the Maori. The treaty is an agreement, in Maori and English, that was made between the British Crown and about 540 Maori rangatira (chiefs).

The treaty is treated as the founding document of New Zealand, and though it was meant to be a partnership between Maori and the British Crown, different understandings of the treaty, and breaches of it, have caused conflict.

The Treaty of Waitangi (which is actually a group of nine different documents) is named after the place in the Bay of Islands where it was first signed on Feb. 6, 1840. It was also signed in a number of other locations around the country in subsequent months.

The treaty was created so that Great Britain could annex the country, protect Maori, regulate British subjects and secure commercial interests.

Some 175 years later, the treaty remains a sometimes controversial, even divisive subject.

In 1935, however, New Zealand honored the treaty with one of the most famous type coins of the 20th century — the Waitangi crown.

The 1935 New Zealand .500 fine silver crown marked the 95th anniversary of the Treaty of Waitangi.

King George V, who also served as emperor of New Zealand, graces the obverse of the silver crown.

A native and an English representative shake hands before a giant regal crown backdrop on the reverse.

The coin was issued in Brilliant Uncirculated and Proof editions, with a total of 660 BU examples issued. Of the 468 Proof coins issued, 364 were sold as part of the 1935 Proof sets.

The Heritage auction is scheduled for Aug. 12 to 17.