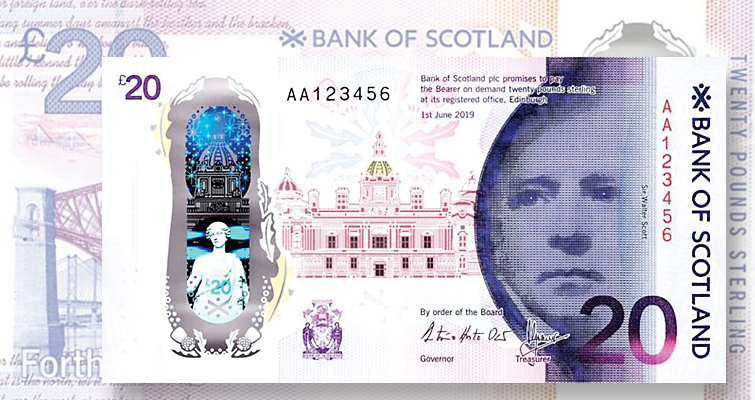 The Bank of Scotland has unveiled the designs of two polymer £20 notes, including this regular issue and a commemorative version, to be issued early in 2020

Images by Bank of Scotland.

The Bank of Scotland has unveiled the designs of two polymer £20 notes, one a regular issue and the other commemorative, that will be issued early in 2020 although they are dated “7 November 2019.”

The regular issue is an updated and modernized version of the current note, part of the bank’s Bridge Series.

The face will continue to feature a portrait of the Scottish novelist and poet, Sir Walter Scott, at right, as well as a representation of The Mound in Edinburgh in the center. This building has been a part of the Edinburgh skyline for over two centuries. It was built in 1806 as the Head Office of Bank of Scotland.

The back will still have the Forth Bridge, slightly revised from the current version. The span is a railway bridge over the Firth of Forth that opened in 1890 and is now a UNESCO World Heritage Site. More prominent on the updated version is a view of the Queensferry Crossing visible in the background. Opened in August 2017, the 1.7-mile-long span is the longest three-tower, cable-stayed bridge in the world.

The Queensferry Crossing is also being honored on a limited issue commemorative £20 note designed by De La Rue. These notes will have the prefixes “QF & QC” unique to this design.

New security features identical on the two notes include an anti-counterfeit “window effect” found in the windows of The Mound; a holographic depth stripe; foil featuring a Northern Lights effect on the top when tilted; and clouds that move left to right when tilted east to west. The notes will also have a tactile feature to help the visually impaired.

The new notes measure 139 by 73 millimeters, slightly smaller that the current 149- by 80-millimeter £20 notes. This was done to make them consistent with the new £20 notes that will be issued by the Bank of England and other United Kingdom banks next year.

All existing notes will still be legal, but will gradually be withdrawn.

The Bank of Scotland is one of three Scottish banks authorized to issue currency in lieu of a central government bank. The other two are Clydesdale Bank and The Royal Bank of Scotland. 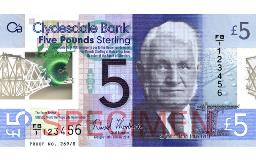 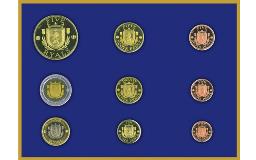