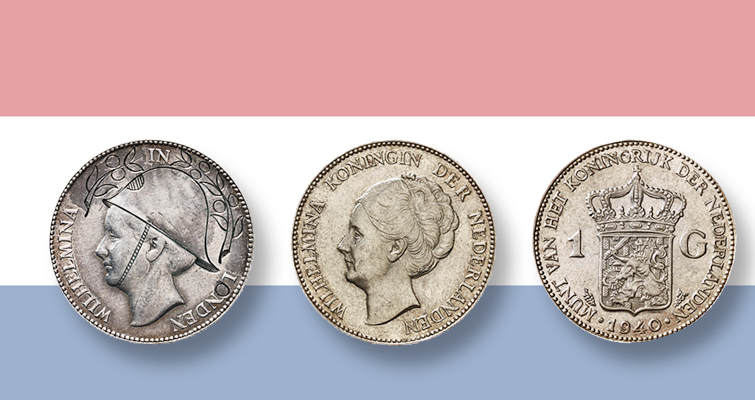 A “Wilhelmina in Londen” carved piece, created from a 1929 silver 1-guilder coin, was offered in Schulman b.v.’s auction No. 341, held April 27 where it realized 168 (about $219 in U.S. funds) including the buyer’s fee. Only the obverse was carved (image at left), shown compared to an unadulterated example of the coin type.

Art can be many things to many people, but rarely does it serve in the role of resistance.

Several numismatic relics of World War II that appeared at auction in late April are examples of Dutch resistance against the Nazi occupation of the Netherlands.

Queen Wilhelmina and the royal family fled to safety aboard a British destroyer to the United Kingdom after German forces swept across the border on May 10, 1940.

Nazis tried to remove the image of Wilhelmina from public life and, according to the Global Nonviolent Action Database at Swarthmore College, as a small act of defiance, Dutch residents turned coins depicting the exiled ruler into jewelry.

Methods of defiance apparently also extended to creation of numismatic folk art: silver circulation coins from the era feature carvings from an unknown artist or artists. The pieces may be looked upon “as an act of resistance, silver being scarce [those] days and expensive,” according to auction firm Karel de Geus, which sold three examples of such pieces on April 22.

During the war, the queen rallied the nation from afar, returning to find that the people had a new affection for her.

While she was away, silver coins depicting her were turned into canvases for rebellion. These objets d’art usually were carved to show the queen wearing a Dutch army helmet, with the normal legend on the coin also modified. Instead of WILHELMINA KONINGIN DER NEDERLANDEN (or Wilhelmina, Queen of the Netherlands) — they usually read WILHELMINA IN LONDEN, or sometimes LONDON, a reference to the English welcoming the Dutch royal family.

The exact purpose and origin of these carved coins has never been proven, according to Albert A.J. Scheffers, former curator and director of the Dutch Mint Museum.

The resistance pieces were usually created from the 1-guilden coin, which measures 28 millimeters in diameter, or slightly smaller than a U.S. Kennedy half dollar (which is 30.61 millimeters). Reverses of the coins are generally, but not always, unaltered.

According to Scheffers, it has been said but never proven that some of these pieces were made during World War II by persons in hiding during the German occupation. The possibility that these were sold to raise funds to support the underground resistance movement is often cited but unconfirmed.

Scheffers said in an email that most of these pieces must have been engraved by skilled engravers, although their identities are unknown.

Frequently, but not always, the carved coins have additional elements, like oranges that represent the royal family’s title. Alternatively, the initials OZO (meaning Oranje Zal Overwinnen, or “Orange Will Overcome”) or the complete phrase may also appear.

The lone example of the Wilhelmina in Londen coin offered by Schulman b.v. in its April 27 auction features a pair of orange branches with fruit, bridging the space legend parts were removed.

Less decorative examples sold in the Karel de Geus auction. All of these pieces were produced on 1940 coins. All three are reported as grading Very Fine.

Scheffers cautions that not all pieces were engraved during the war. He notes that some pieces were engraved after the war as “remembrance pieces,” with other post-war pieces probably made with profit in mind, since the engraved coins could be sold “for a much higher price that the original 1 guilder pieces.”

None of the experts contacted by Coin World could provide details regarding how to tell the difference between examples made during the war and later pieces. Collectors might consider attributes like patina and the “look” of items of a certain age, though even those elements can be mimicked by a skilled faker.

Unlike how American hobo nickels have earned a small, loyal following, the Dutch pieces appear to have gained little notice in the European numismatic scene. Representatives from Schulman and Karel de Geus could not provide additional information about the pieces the firms recently sold beyond what was included in the lot descriptions.

While the exact origins of the earlier pieces are unclear, they remain as symbols of hope among the Dutch people and perseverance during war. ¦