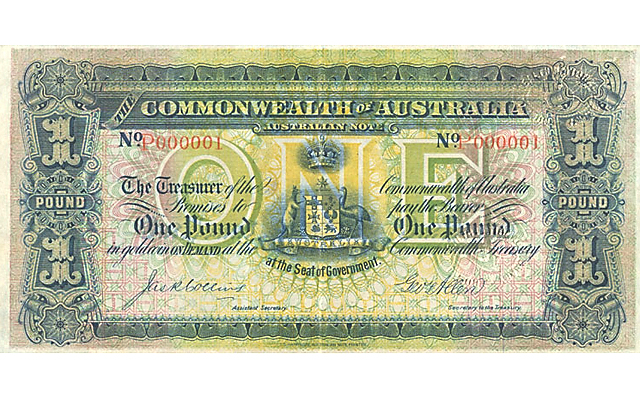 First £1 note, an Uncirculated specimen note with serial number P000001, was recently discovered uncataloged in the archives of the National Library.

Image courtesy of the National Library of Australia

Australia, as a nation, was relatively late to the inclusion of paper in its currency system. Only when in 1910 the Australian Notes Act withdrew the legal tender status of state bank notes and assigned responsibility for the issue of bank notes to the Commonwealth Treasury, and the Bank Notes Tax Act imposed a tax of 10 percent per year on all bank notes issued by private banks, did a national paper currency get its start. As a first step, some private bank notes were overprinted AUSTRALIAN NOTE by the Treasury and circulated as Australian bank notes until new designs were ready for the government-issued currency. Finally, the first notes were issued in 1913.

The Canberra Times reports that the first £1 note, an Uncirculated specimen note with the serial number P000001, was recently discovered uncataloged in a file marked “specimen notes and other currency” in the archives of the National Library.

This sent librarians on a chase through even more archives. They learned that soon after it was printed the note was sent to Prime Minister Andrew Fisher by Secretary to the Treasury George T. Allen with a note reading, “I enclose £1 note No 1 as promised — You might give me a sovereign for it later on.”

In 1927 Fisher gave it to Prime Minister Stanley Bruce “for preservation in the Commonwealth National Library.” There it sat until last year, when, according to the Times, it was discovered as a result of a “chance inquiry.” The Times said that an expert valued it at $1.5 million Australian funds (about $1.2 million U.S.) and called it “arguably the most important banknote in Australia’s post-Federation history.”

Probably fewer than 20 specimens are known. It was placed on display in the library on May 11.

Pitt also said that he expected some note dealers to make submissions to try and purchase the note, but that it “is totally unlikely that this note will ever come onto the market as it really is a true museum piece for the nation.”