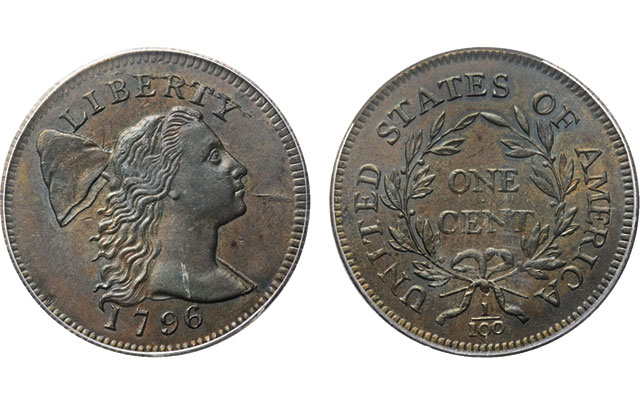 This recently discovered 1796 Draped Bust cent is the finest known example of the Sheldon 96 die variety by more than 50 grading points.

An Internet search of an obscure auction company in the English countryside has yielded the finest known example of Sheldon 96 variety of 1796 Draped Bust cent. It tops the second-finest known piece by more than 50 grade points.

The coin, acquired from the English firm in February by Thomas Paul's American Heritage Minting in Jenkintown, Pa., was first graded and encapsulated Mint State 63 brown by Numismatic Guaranty Corp. before consignment to the May 31 McCawley and Grellman — The Copper Specialists sale in conjunction with Ira & Larry Goldberg Auctioneers.

As of April 2, the coin was in the process of being crossed over into a Professional Coin Grading Service holder.

The Sheldon 96 variety as cataloged by William H. Sheldon in Penny Whimsy is the rarest of the numbered varieties of 1796 cents.

What has astonished specialists about this MS-63 piece is its condition.

“Until this discovery, the two finest known pieces were net Fine 12 with significant defects,” Grellman said. “Even the finest collections had to ‘settle’ for a substandard coin.

“How the coin came to be brought to England and secreted in an obscure collection for over 200 years will likely remain a mystery.’”

Paul said he stumbled across the coin while surfing the Internet soon after the Florida United Numismatists convention in January. The auction lot was listed out of sequence in regard to the other coin lots and only offered an obverse photo of the coin without attribution as to die variety.

Paul emailed the auction house with a request to provide him with an image showing the reverse.

Paul described the key diagnostic for the variety as the die break from the rim down the left side of the T in UNITED, across CENT, across the right side of the M in AMERICA to the rim.

Soon after submitting his request, the reverse image was provided by the auction firm. And there, staring back at Paul, was the diagnostic die crack.

Paul said he flew to Europe in February to attend the auction. Paul said he had all he could do to contain his excitement while examining the coin in person during lot viewing.

Paul said he examined all of the coin lots so as not to draw attention to other potential bidders as to his interest in the coin.

Paul said bidders were on the auction floor as well as on the telephone, with the other floor bidders dropping out early.

Paul said he had a set bidding level he was willing to go to in order to acquire the coin, but found it unnecessary to reach that plateau.

Paul said he was pleased at the level at which he was able to acquire the rare S-96 1796 cent.