?Queen’s Beasts: Too many, or the more the merrier? 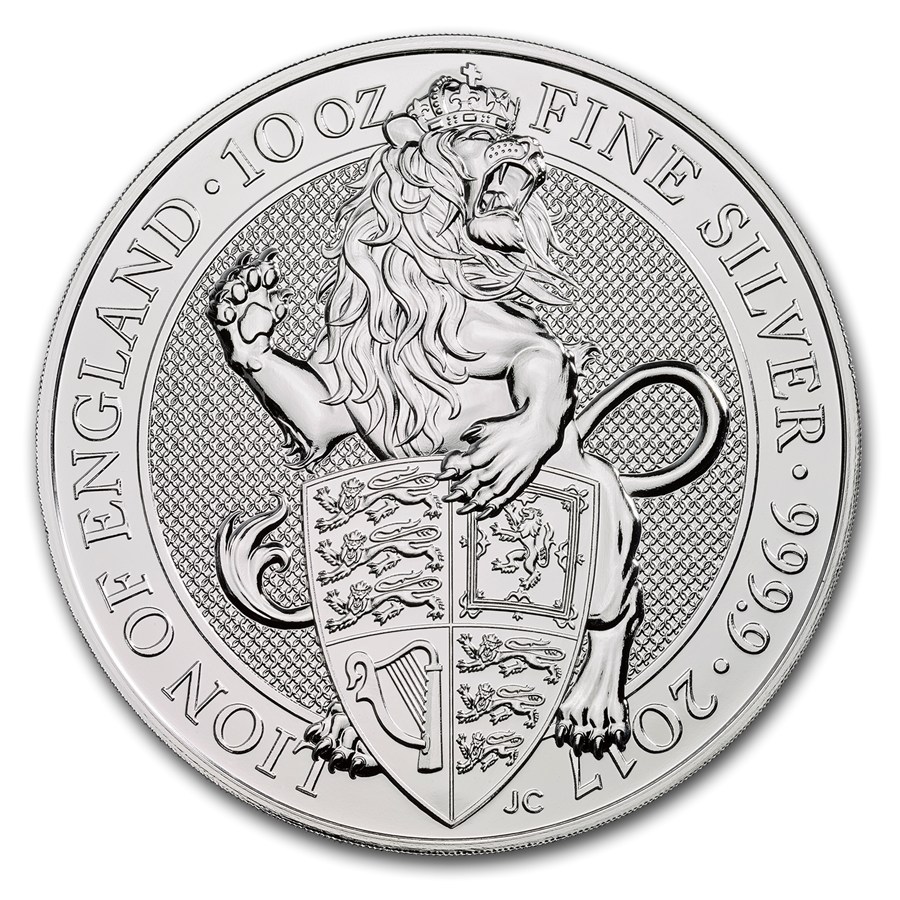 The first in the Royal Mint’s series of popular bullion Queen’s Beast coins is now available in nearly countless combinations of sizes, metals and finishes. Is this good or bad?

This week U.S. dealers that distribute the Royal Mint’s popular Queen’s Beast coins announced that two new versions were added to the beast lineup: a 10-ounce silver bullion coin and a 1-ounce platinum bullion piece. The 10-ounce silver Lion of England launched this week has an impressive 90-millimeter diameter, and the platinum coin features the same design.

The companies selling them, such as J.M. Bullion, APMEX, Bullion Exchanges, and Pinehurst Coins, are offering the coins for a small premium over melt. For example, the 10-ounce silver coin runs about $200, while the platinum coin is about $1,000.

Previously, the Royal Mint had started offering 2-ounce silver coins, 1-ounce and 1/4-ounce gold coins, and silver and gold Proof versions ranging from an ounce to a kilo.

The proliferation of Beast coins is reminiscent of what happened with the Australian Wedge Tailed Eagle coins that are sold in an extensive range of sizes in silver, gold, and platinum, as bullion and Proof coins, including High Relief and Reverse Proof versions, and even a bimetallic silver and gold issue.

Based on discussions with fellow collectors, reactions appear to be mixed. Some people are pleased to have more options and only regret that they can’t keep up.

Others feel there are too many. But my own feeling has always been that just because a mint offers so many choices does not mean a collector needs to acquire all of them.

A good approach is to focus on the version or metal you prefer and stick with that, and perhaps add some others along the way if they are of particular interest.

Keep in mind, there are 10 beast designs in all, each with the stunning artwork of Jody Clark. Thus, 10 of every option would involve a major financial commitment.

I’ve often heard collectors of silver eagles complain about having too many coins with various finishes, but the same principle applies there. Either you are a completionist and are willing to spend the money to get all versions, or you pick the versions that appeal to you and stick with those.

A counterargument is that issuing a very wide range of versions of the same coin somehow dilutes the value of previous coins, but I am not sure how true that is, especially if one is referring to bullion, since the value is usually based on metal content unless it is a 70-graded version. There may also be some additional premium for issues like the first one, the Lion.

On the other hand, for collector versions there may be some risk that having too many versions will reduce values over time.

Feel free to add your thoughts in the comments area provided.

For more about this series, see this section of the Royal Mint’s site: http://www.royalmint.com/discover/uk-coins/The%20Queens%20Beasts