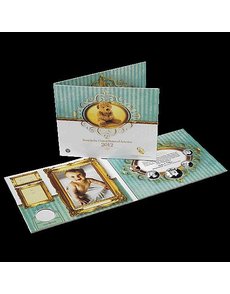 The 2012 Birth set, introduced by the U.S. Mint as a new numismatic product on March 13, is supposed to contain Proof versions of five circulating U.S. coin denominations in their base metal compositions. An unknown number of sets were released mispackaged with 90 percent silver half dollars instead.

U.S. Mint officials are still trying to the determine the exact cause and number of 2012 Birth sets mispackaged with a 90 percent silver Proof 2012-S Kennedy half dollar instead of the intended Proof copper-nickel clad version.

The sets are packaged by hand at the San Francisco Mint.

“It appears this was a material handling error specifically involving the silver Proof half dollar,” Mint spokesman Michael White said April 4. “We are still working to determine the exact cause.”

Mint officials learned of the packaging error on March 26, White said, when a member of the Mint’s sales and marketing staff read a customer’s comment posted on an online coin collecting forum. The comment indicated the customer had received several 2012 Birth sets mispackaged with Proof 2012-S Kennedy silver half dollars.

Officials immediately implemented manual inspection of every Birth set in inventory at contracted sales centers at the Denver and Philadelphia Mints; sales centers at U.S. Mint headquarters and Union Station in Washington, D.C.; and at the contracted order fulfillment center operated in Plainfield, Ind., by Pitney-Bowes Government Solutions.

As of April 3, at the five locations 5,831 sets had been manually inspected, and only 17 sets mispackaged with the silver half dollar were identified, all at the fulfillment center, White said.

No sets with the silver coin were found in Philadelphia Mint, Denver Mint, headquarters and Union Station sales kiosks, he said.

Updated numbers will be provided as they become available, White said.

Sets identified as correct are being released to saleable inventory as they are verified and approved, White said.

“Incorrect sets will be returned to San Francisco to have the silver Proof half dollar removed and replaced with the correct clad half dollar,” White said. He said it had not been determined as of April 4 whether the silver half dollars from the 17 mispackaged Birth sets would be retained for repackaging in 2012-S Silver Proof sets, which go on sale June 4, or be melted.

White said any customer who has received a Birth Set with a silver Proof half dollar and wants a replacement should contact the Mint Call Center at 800-872-6468.

The Birth set — a new Mint product introduced March 13 at $19.95 each — is supposed to contain Proof 2012-S versions of the cent through half dollar in their normal circulating compositions. The coins are mounted in a folder with spaces for personalization. Each coin is housed in an individual plastic capsule that can be opened with no damage resulting.

Officials still don’t know how many sets were mispackaged among those that were shipped to and received by customers.

Dealer Al DiTucci from Timers Coins LLC in Kentucky ordered 40 Birth sets combined from separate orders placed March 17 and March 19. Of the 40 sets he received, 32 contained a silver half dollar instead of the copper-nickel clad version.