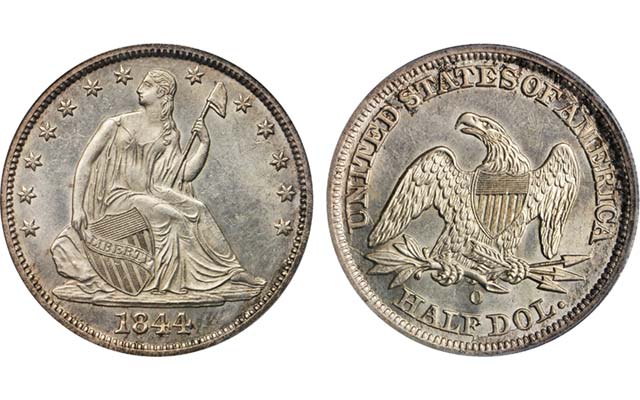 The author rates this Mint State 63 1844-O Seated Liberty half dollar with an A for sharpness of strike and a B for eye appeal. It sold for $3,055 at auction. The overall quality is exceptional, finer than many graded higher.

My column last week drew a number of responses, all favorable, several suggesting that I write more.

The subject was this: The vast majority of coin buyers look only at the numerical grade and buy accordingly. For them, a Mint State 65 coin is automatically better than an MS-63 coin, even though the higher-graded one might be weakly struck and unattractive, while the lower-graded coin might be sharp and have good eye appeal. For a registry set of certified coins, the 65 may be a winner, the 63 a loser.

I suggest that three major considerations are at play when describing a coin:

1. Numerical grade. This can be quantified using the Official American Numismatic Association Grading Standards. These are a bit wiggly, as we all know, as grades can change with resubmissions as well as “gradeflation.” In 1990, relatively few coins were assigned numbers over 65. Today there are many. Still, we know today that at a given time, an MS-65 coin has less wear or friction than an MS-63 coin.

2. Sharpness of strike. This can be very well defined. Descriptors for the features of each coin type are all that is needed.

3. Eye appeal. This is in the eye of the beholder, of course, but so is numerical grade. Put 10 MS-63 Seated Liberty half dollars in a row, and it will be easily seen that some are attractive and others are not.

There have been some numismatic advances. For a start, Certified Acceptance Corp. adds a green sticker for a very nice coin within a grading number category.

Without getting too complicated, perhaps a good expansion would involve the categories I mentioned above: (1) Numerical grade, which we already have. (2) Sharpness of strike rated A (full details) to E (weak). (3) Eye appeal rated A (very beautiful) to E (ugly). You would then be more informed.

In each pair listed below, which coin would you buy?:

I would choose the one with the lower number each time. How about you? Many other coins could be mentioned, such as the shown 1844-O Seated Liberty half dollar.