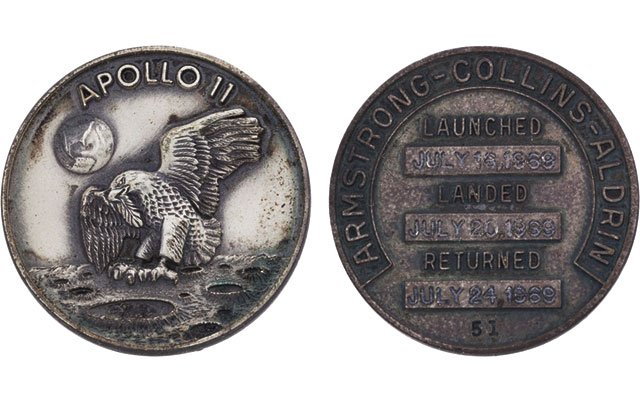 A medal that accompanied astronaut Buzz Aldrin during the 1969 Apollo 11 mission to the moon realized $27,500 during Heritage’s Nov. 12 Space Exploration Auction.

Heritage’s Nov. 12 Space Exploration auction in Dallas contained a number of Robbins medals from the collection of the second man to walk on the surface of the moon. The medals were once part of the personal collection of Aldrin, the lunar module pilot for the July 1969 Apollo 11 mission.

Heritage outlined the medal’s historical significance in the lot description: “The obverse depicts [Apollo 11 crew member Michael] Collins’ early and original concept for the mission insignia with the eagle carrying an olive branch in its mouth. NASA thought the sharp, open talons of the eagle looked too ‘warlike’ and the olive branch, representing peace, was moved to the claws. This is one of, if not the only, major official item that renders the insignia as it was meant to be by the astronaut designer. The reverse has the dates of the mission, surnames of the crew, and the serial number. Included is the original plastic case with the numbered sticker on the bottom. This wonderful example was gifted to Aldrin’s older sister Fay Ann (his ‘name giver’). One of the most desirable of the Apollo 11 Robbins medals ever offered. An opportunity for the advanced collector.”

Another medal from Aldrin’s collection exceeded Heritage estimates. The Australian Geographic Award for Excellence Medal was presented to Aldrin in 2010. The gold-colored medal is 2.5 inches in diameter and housed in a custom case of leather and suede. As described by Heritage, “The obverse features James Cook’s compass at center with ’Australian Geographic Award for Excellence’ around. The reverse has ‘By Encouraging Adventure We Keep Alive A Vital Spirit of Australia’ around a center engraving: ‘2010. Honorary Lifetime of Adventure. Buzz Aldrin. For an extraordinary lifetime spent pushing the boundaries of exploration.’?” The medal is described as “Excellent” in quality and had an estimate of $300 to $500. It realized $1,125.

The auction also offered a rare (one of three produced by artist Josephine Mead) reproduction cast of Aldrin’s footprint on the moon.