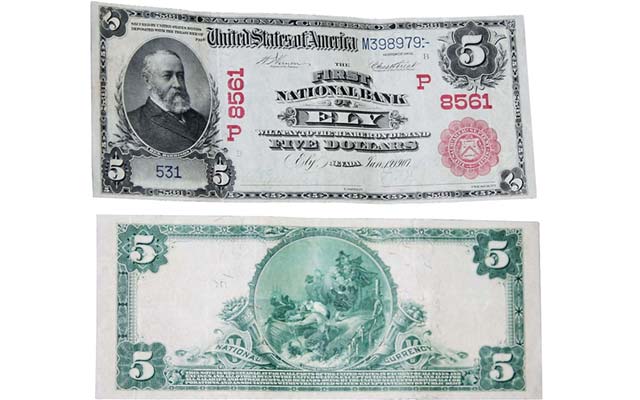 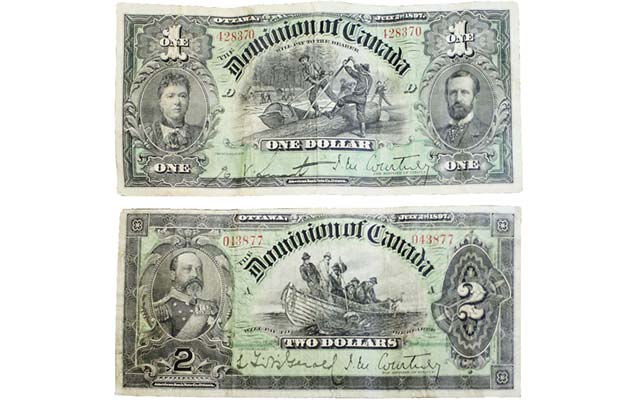 A new discovery, the first-ever Series 1902 Red Seal national bank note from the First National Bank of Ely, Nev., sold for $120,750 on April 18 at a local auction of miscellaneous ephemera in Williston, Vt.

The $5 note (Friedberg 589, Charter No. 8561) was one of just 10 lots of paper money in a 451-lot sale consisting mainly of old photos, books, posters, stamps, memorabilia, and about a dozen lots of coins.

The national bank note’s description in the online catalog of Duane Merrill & Company belied its importance. It said only: “1902 US First National Bank of Ely, Nevada $5 National Currency banknote – rare, red seal, 2 folds, otherwise crisp.” It gave a starting bid of $1,000 and a $2,000 to $5,000 estimate.

At least a few of the six bidders listed as participating obviously did their homework and recognized the note’s uniqueness and rarity.

Richard Martineit, a Vermont collector who attended the sale and examined the note, remarked as to its condition that it was very clean and crisp, but that the inked bank signatures were nearly invisible (a known occurrence on clean national bank notes).

Rather than the note being cut from its four-subject sheet, it appears that it was torn off using a straight edge as a cutting guide.

As to the sale itself, the bidding started with an Internet bid of $16,000 and quickly proceeded to $41,000. A war ensued from there between two bidders who pushed the price in $1,000 increments until the hammer fell to a floor bidder, telephone in hand, with the winning $105,000 bid.

Nevada national bank notes, and particularly the large size ones like this note, are among the rarest and most desirable. Only 16 banks in 13 towns issued notes, of which about 281 large-size and 992 small-size are known.

A Nevada Red Seal note from anywhere but a Reno bank is very rare. With this discovery there are now 35 small-size and 13 large-size notes known from First National Bank of Ely. The last recorded sale of a large-size Ely national bank note was in November 2013 when Stack’s Bowers Galleries sold one of five known $20 Plain Back issues in About Uncirculated 50 for $21,150.

Ely, in the eastern part of the state, was founded as a stage coach stop on the Pony Express. It came to prominence as somewhat of a boom town with the discovery of copper in 1906 and its population soared from 525 in 1900 to 2,055 in 1910. The 2010 census listed 4,255 inhabitants. Despite the town’s remoteness and small size, its total issue of $1,001,880 in face value national bank notes ranks it fifth in the state.

Ethan Merrill, a principle at the auction house, told Coin World that he was picking up a consignment of New England paintings at an old home in rural Vermont, and almost as an afterthought, the elderly couple handed him an envelope containing some paper money with the comment that they did not know what it was but that perhaps it may be worth something.