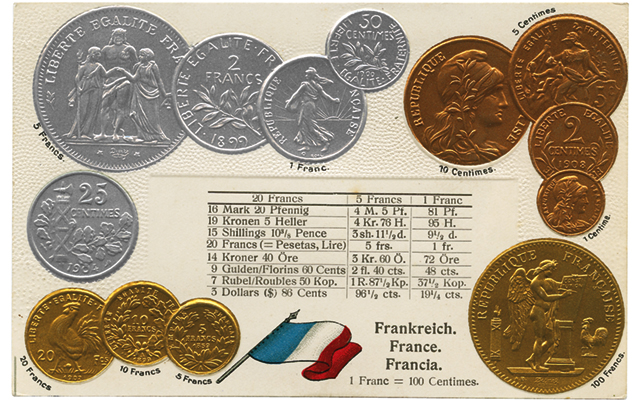 French coins from the first decade of the 20th-century appear on a souvenir postcard issued by a German publisher. The coins include some iconic designs with American influence. 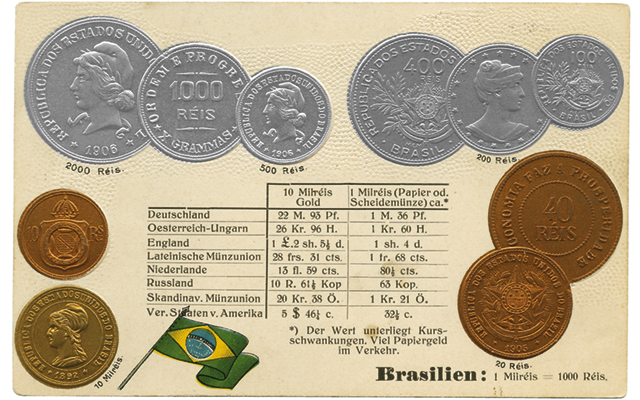 A post card showing coins of Brazil is appreciated for the varied, and novel, denominations of the Brazilian series, as well as some designs showing Liberty.

Previous
Next
?I have often described my collecting pursuits as voracious, being a numismatic gourmand in a field of gourmets. The American Numismatic Association World’s Fair of Money in Rosemont, Ill., from Aug. 5 to 9 was a veritable numismatic buffet, providing another opportunity to increase my collection.

Perhaps my neatest acquisition at the show wasn’t even a coin, but rather a pair of colorful post cards featuring coin designs from Brazil and France.

These post cards are from a successor to a series issued for use by cambists (a fancy word for money changers). Today foreign currency exchange rates are available widely in print and online, but 100 years ago, people were on their own when it came to exchanging kroners or marks for pounds or pesetas.

This situation gave rise to a series of post cards, produced by a German businessman named Hugo Semmler. His cards show embossed images of then-current circulating base metal, silver and gold coins, with a handy exchange-rate chart showing comparable values for common currencies.

David Gladfelter detailed the history of these postcards in two articles in 2005 and 2006 in The Asylum, a publication of the Numismatic Bibliomania Society.

These post cards capture in cardboard a snapshot of coins from nearly four dozen countries at around the first decade of the 20th century. Successive issues followed, both by Semmler and other publishers, as the cards gained widespread acceptance as souvenirs, superseding their original purpose.

On one card, the beauty of iconic French coins designed by Oscar Roty, Augustin Dupre and several others is immediately apparent.

Roty’s The Sower (La Sameuse) depicts the sun’s rays spoking the horizon behind a personification of Liberty striding toward a new century. The design was no doubt an influence on Adolph Weinman’s Walking Liberty half dollar that would follow a few decades later.

The Liberty on the 1-, 2-, 5- and 10-centime coins wears a Phryghian cap, a motif familiar to Americans thanks to its place on early coins like the half cent and cent.

The Brazilian card is beautiful but lacks some of the aesthetic allure of the French coin card. However, the fascinating series (also including designs of Liberty) beckons for its depictions of uncommon denominations like 40-, 200- and 400-real coins.

These post cards are adjuncts to world coin collecting, and are certainly more affordable than the coins that they show. (Each post card cost $20.) And they are worth a prominent space on my desk.