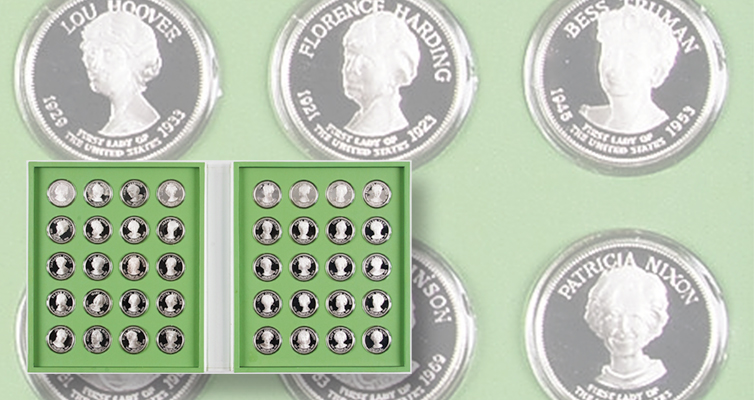 Advertising once fostered the belief that future generations would want these “heirloom” pieces, but only the rising price of silver has saved this Franklin Mint material from the dismal fate of Avon bottles and Beanie Babies. 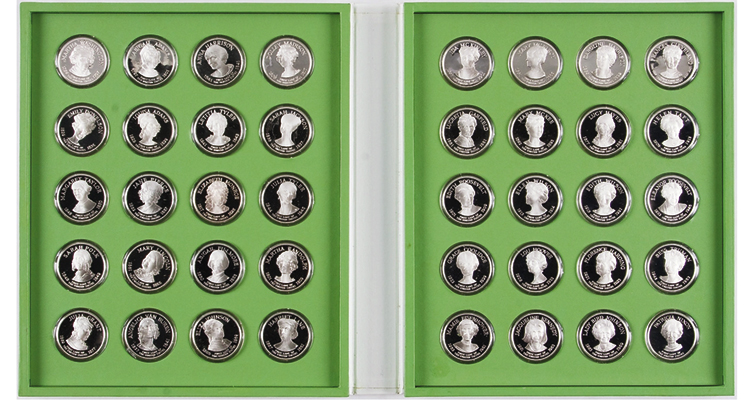 This 1971 set of 40 Franklin Mint medals honoring the first ladies of the United States contains 41 ounces of silver. It sold for $578.785 at auction in 2014, essentially its value as bullion. The original purchase price was $9.50 a medal, or $380 for the set.
Previous
Next

?The Franklin Mint was a marvel of marketing and good design.

Entrepreneur Joseph Segel (who would go on to found QVC shopping network) created Franklin Mint in 1964 to craft and sell commemorative medals and coins. Former U.S. Mint Chief Engraver Gilroy Roberts, who designed the obverse of the Kennedy half dollar, signed on to head the artistic side of the enterprise.
The result was set after set of beautifully designed commemorative medals that were sold to the public through ubiquitous newspaper, magazine and direct mail advertising in the 1960s and ’70s.
The advertising fostered the belief that future generations would want the “heirloom” pieces and pay big money for them. Noncollectors bought the company’s medals by the millions, apparently unaware that few people actually collect medals.
Buyers bought the medals – usually sterling (0.925 fine) silver – on a subscription basis, at the rate of one or two medals a month until a set was completed.
The 1971 20-medal Great American Landmarks set is fairly representative of the mint’s products. Each 39-millimeter medal contained 1.04 ounces of silver and depicted a historic place, such as Mount Rushmore and the Alamo. The medals sold for $9.50 each.
At the time, silver was selling for $1.55 an ounce, giving the Franklin Mint a handsome profit. The situation was ripe for disaster for buyers who tried to sell.
However, the rising price of silver saved Franklin Mint material from the dismal fate of Avon bottles and Beanie Babies. Silver soared in the ’70s, briefly topping $50 an ounce in 1980. Franklin Mint buyers were in clover.
While a few sought-after Franklin Mint medals sell at a premium to silver because of their subject matter, most of the private mint’s products trade as bullion.
Even with silver trading at $14.89 an ounce as I write this, the original buyers of most Franklin Mint medals are above water, giving them a rare win in the collectibles marketplace.
Next: Evil people on coins