The people’s paradise: Which coins did Joseph Stalin appear on? 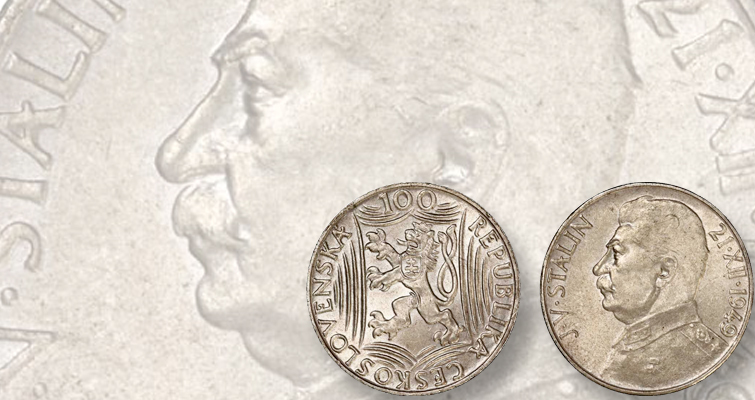 Soviet coins under Joseph Stalin, who caused the deaths of countless millions of his countrymen, never featured his likeness. But Czechoslovakia produced .500 silver 50- and 100-korun pieces, 1 million of each denomination, to celebrate his 70th birthday in 1949. The 100-korun piece is shown here. 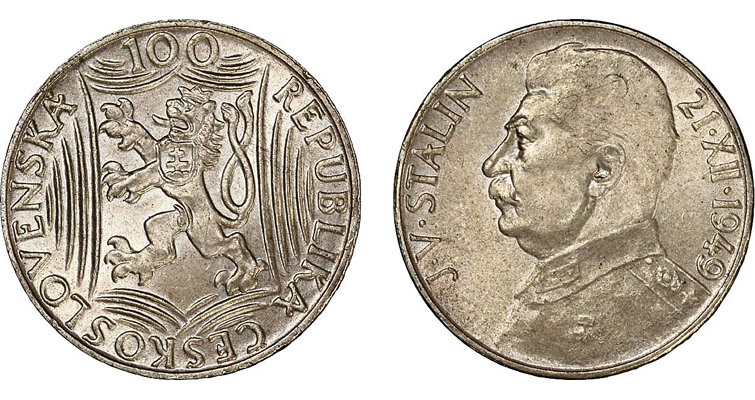 Czechoslovakia produced 1 million of these .500 silver 100-korun pieces celebrating Joseph Stalin's 70th birthday in 1949, a year after communists took over the nation in a coup.
Previous
Next
This is the third in a five-post series about Evil People on Coins.
Read the rest of the series: Adolf Hitler | Pol Pot
Soviet dictator Joseph Stalin, who made common cause with Hitler until the untrustworthy German attacked him, never appeared on a Soviet coin. But that didn’t stop sycophants from placing his likeness on the coins of another country.
Soviet Union coins of the era were about as uninspired as possible. They typically showed the denomination on one side and the hammer and sickle superimposed on a globe on the other.
Stalin, who ordered or caused the deaths of countless millions of his countrymen, did appear, curiously, on a 1949 Czech coin celebrating the evil one’s 70th birthday. The coins were issued a year after communists took over the nation in a coup.
The .500 silver 50- and 100-korun pieces are plentiful and inexpensive. Czechoslovakia produced 1 million of each coin. They catalog today for less than $10 each in circulated condition and not much more in Uncirculated.
They show a lion on one side and Stalin on the other. The legend J V STALIN 21 XII 1949 – Stalin’s birthday – surrounds the bust.
Next: Law and order or anarchy