In breast cancer awareness coin, U.S. struggling to keep up with Canada 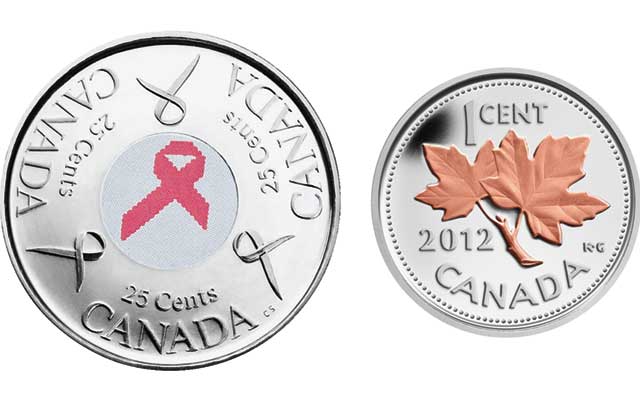 The Royal Canadian Mint celebrated Breast Cancer awareness with a circulating commemorative 25-cent coin in 2006, left, and issued a coin with pink gold plating in 2012.

Collectors of Canadian coins could be excused for thinking, “haven’t we done this already?”

Even if Congress passes the legislation as it exists now, the program will be just another instance of America playing “catch up” with its neighbors to the north.

Canada issued a circulating breast cancer awareness coin — with pink ribbon, no less — in 2006, and a coin with pink gold in 2012.

The 2006 circulating 25-cent coin was the second colorful circulating coin issued by Canada (and in all the world), and since then the process and practice has been repeated numerous times.

The list of innovations and “firsts” for Canadian numismatics is a tremendous one.

Between Canada and the U.S., which nation removed its small denomination paper money first? That would be Canada, in 1987.

Here is America, the $1 Federal Reserve Note is still stuffed in our wallets and purses (thanks, Crane & Co., and Massachusetts politicians!)

In 1998, Canada issued a ringed bimetallic coin for circulation (the $2 coin, or “twoonie”). Down here, we’re still waiting.

Which of the two nations has eliminated the cent coin?

You know the answer (the Habs dropped the small coin in 2012).

A cynic would argue that there is hardly a theme the Royal Canadian Mint hasn’t celebrated on coinage.

A realist would acknowledge the technological strides made by the RCM with circulating, collector and bullion coins.

Canada is not hamstrung by a political body whose approval rating rivals that of used car salesmen and IRS agents.

The U.S., on the other hand, is boxed in to two commemorative coin programs annually.

Many collectors of Canadian coins would surely welcome the practice of a limited number of themes per year.

But in America, this limit is too restrictive, since so many U.S. commemorative coin programs have been co-opted by organizations searching for pay dirt in the parlors of power.

Instead of seeking coins that elevate and honor the nation and its glorious history, proponents of new American coin programs seek surcharges and treat collectors like ATMs.

Somewhere in between, there’s a happy medium. At least the Canadian coin program allows collectors a choice.

Take it or leave it, that’s something all collectors should be able to agree on.