Stories intertwine in Paris in the 19th century 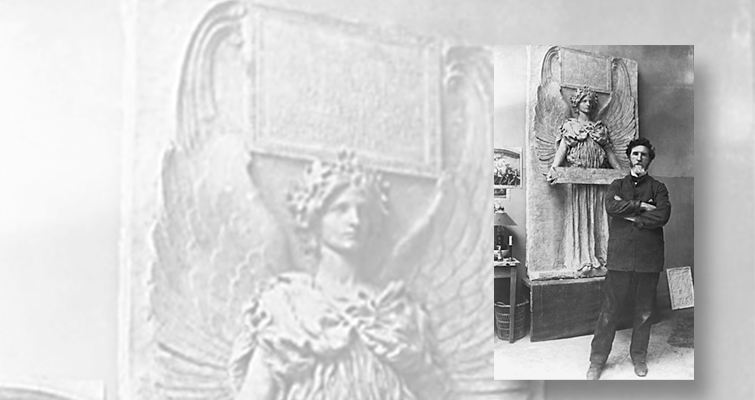 The master American sculptor Augustus Saint-Gaudens is shown with a version of his Amor Caritas in his Paris studio, created after he had already established himself. In 1869, both a young Saint-Gaudens and Theodore Roosevelt were in Paris. While their paths did not intersect then, their collaboration at the dawn of the 20th century resulted in numismatic greatness.

?In Paris in 1869, among the many Americans visiting there were two youths — Gus, a struggling artist barely into his 20s and Teedie, the sickly 11-year-old son of a family of aristocrats.

It is unlikely that the two crossed paths that year in the City of Light. They came from vastly different worlds. The Irish-born Gus was an improvised art student of no particular brilliance, struggling to make a tiny income from cutting cameos. Teedie was a scion of a very wealthy New York family. Decades later, though, at the dawn of the 20th century, their lives would intersect when both were at the height of their careers, and brilliance would result from their collaboration: Augustus Saint-Gaudens was the pre-eminent American sculptor and Theodore Roosevelt was president of the United States.
The author-historian David McCullough in his book The Greater Journey: Americans in Paris tells the story of several generations of young American men and women who journeyed to Paris to learn and hone their talents in the most important city of the arts in the world.
Roosevelt is only a minor figure in the book and his collaboration with Saint-Gaudens on the 1907 gold eagle and double eagle warrants a single sentence in the book’s Epilogue. The artist, though, is a central figure of the book, as McCullough relates how a poor art student became one of the greatest American artists of all time.
Paris was temporarily home to many talented Americans in 19th century — Henry James, Mark Twain, Nathaniel Hawthorne and Ralph Waldo Emerson among them. In the 1890s, Saint-Gaudens would meet in Paris another young American artist, James Earle Fraser, whose sculpture The End of the Trail of a bedraggled Native American astride his horse during a blizzard led the older and now established artist to say, McCullough writes, “You haven’t done a man. You’ve done a race.” Fraser would later work in Saint-Gaudens’ studio and like his mentor would not only achieve greatness in traditional sculpture but also create a numismatic masterpiece — the Indian Head 5-cent coin — in what would be a period of American Renaissance of coinage design inaugurated by Roosevelt.
When lives intertwine, the amazing can occur.