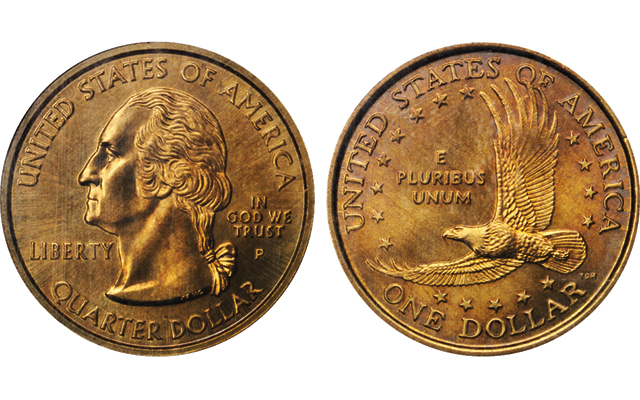 A mule coin is a coin struck with dies that were not intended to be paired.

"A numismatic mule is a fascinating creature, a hybrid of two designs never meant to appear together,” Coin World senior news editor William T. Gibbs wrote in 1992. "Some are accidental in nature, true errors that any collector would welcome in his or her collection. Other mules were deliberately produced, either accidentally, out of necessity to meet coinage demands, or from a desire to produce something special (even if fraudulent) for collectors."

There is a market for mules just like there is for correctly struck coins.

The hybrid coins take their name, of course, from the hard-working animal that results from the cross-breeding of a horse and a donkey — half one thing and half the other.

"Among U.S. coins, some mules have achieved legendary status,” Mike Diamond wrote in a Collectors’ Clearinghouse column published online on Nov. 16, 2013. "The most prominent of these would likely be the 14 Sacagawea dollar planchets struck by a Washington quarter dollar obverse die and a Sacagawea dollar reverse die.”

"Probably the best known example among foreign coins is the 2000 Canada Millennium series 'Map Mule' 25-cent coin,” he wrote. "The obverse is the one normally used for this series and features the bust of Queen Elizabeth. The reverse face of each coin carries a design normally seen on the Royal Canadian Mint medal that accompanies the 12-coin 25-cent piece Mint set produced in that year. The design features a map of Canada constructed from maple leaves."