What is a die break and are coins that feature them more valuable? 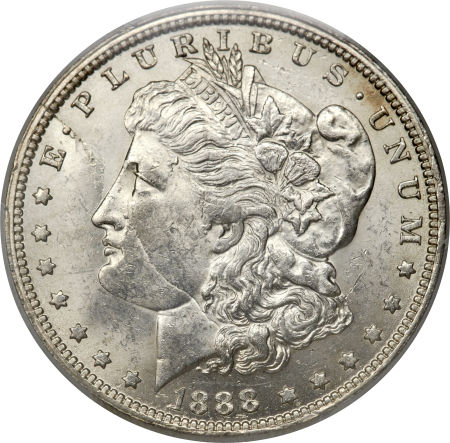 A small number of 1888-O Morgan dollars feature a die crack that has led to variety's "Scarface" nickname.

A marginal die break, or cud, occurs when a coin is struck from a die that is missing a piece that is adjacent to the rim, and a “featureless, raised glob of metal,” as William T. Gibbs noted in a Coin World column from the Nov. 8, 1993, issue, is left on the coin as the more pliable coin material, such as gold or silver, fills the hole in the die left by the missing piece.

The closely related die crack error results from a fracture in the die though no piece of the die actually breaks away, at least immediately after the crack forms. Metal can flow up into the crack, forming a raised line on the coin.

"Broken dies result from a tendency of some metals, particularly certain alloys of steel, to become incredibly hard, to the point of becoming brittle,” Gibbs wrote.

"While such hard metals can be used to shape and form softer metals, their lack of pliability can be their downfall if they begin to crack and break under pressure.”

Bill Fivaz explained in a Collectors’ Clearinghouse column from the July 6, 2009, issue of Coin World that a die break is “progressive in nature”; it begins as a die crack, then grows to a break as the damaged die continues to be used.

“The longer the die is in use, the larger the die break becomes until it is retired from service or completely breaks,” Fivaz writes.

The value of a coin with a die break or a die crack often depends on the size and severity of the fracture in the die. In general, die breaks or cuds are worth more than die cracks.

A popular type of major die break error on the Lincoln cent is nicknamed the “atheist cent” because the break or cud affects the motto IN GOD WE TRUST, obscuring portions or all of the inscription. Recent eBay transactions included pieces of different dates and Mint marks selling in a range from $22 to $65.

Most die crack errors are minor and are of low value, but there are some exceptions.

One of the more famous die cracks appears on a small number of 1888-O Morgan dollars, which are also affectionately referred to by collectors as the Scarface variety.

The crack starts at the rim between E and P of PLURIBUS on the obverse and runs in toward the center of the coin, under Liberty's eye and across her cheek to her neck. The variety is considered scarce in all grades.

For example, at an Aug. 7, 2014, Heritage auction an example of the variety graded Mint State 62 with a green Certified Acceptance Corp. sticker indicating quality within the grade sold for $7,637.50. The price of a normal 1888-O Morgan dollar in this grade: around $60.