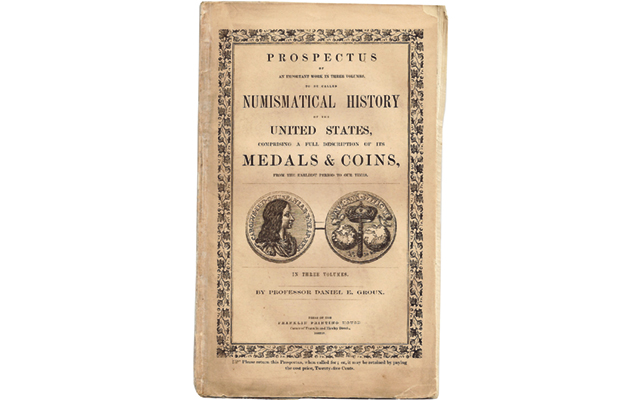 Cover of Daniel Groux's prospectus for Numismatical History indicates it was projected as a three-volume set.

You say you’ve never heard of these titles? You are not alone. They are “timeless” numismatic books in that they were planned, perhaps even written, but never published.

Len Augsburger, co-author of The Secret History of the First U.S. Mint, suggested that I write about coin books that never were, and those that were published although never finished.

Bushnell had a numismatic cabinet to die for, especially rich in tokens and medals. He was a prickly pear of a man, always eager to quarrel with fellow collectors. One of these adversaries-turned-friends was Augustus B. Sage.

Writing in the February 1867 issue of the American Journal of Numismatics, Sage revealed that since 1858, Bushnell had been occupied with “… a work which, if ever completed, will rank as the only authentic History of American Coinage ever published in this country.” That turned out to be a big “if,” for Bushnell wrote some small monographs on tokens, but never published his comprehensive history.

One of Bushnell’s contemporaries was Daniel Groux, a Swiss émigré who owned a huge collection of coins and medals. He tried for years to unload it, at inflated prices, to American universities or museums, but none bit.

In 1856, Groux issued a handsome prospectus for a projected three-volume set, including one volume consisting entirely of illustrations. Groux cagily demanded that $8 accompany “pre-publication” orders for his Numismatical History, which he refused to refund after the book failed to appear.

Groux the grifter was bad enough, but everyone’s numismatic whipping boy was Mason, whom The American Stamp Mercury and Numismatist described as “an ignoramus who sets himself up as a man of learning.”

In the June 1879 issue of Mason’s Coin Collector’s Herald, Mason was in “man of learning” mode: “We propose, at no distant day, to publish a History of the Rise and Progress of Coin Dealers and Collectors in the United States. …” That day proved much more distant than planned, for Mason’s book never saw the inside of a printer’s shop.

Bushnell, Groux, and Mason — a grumpy antiquarian, a scheming salesman, and a pompous windbag — shared one unfortunate trait: they were better at starting books than at finishing them.

They all had stories to tell, and knew where many a metaphorical body was buried, but if they actually wrote first drafts, these irreplaceable manuscripts are unlocated today. If one were to turn up, it would cause a sensation.

For now, we are left with the melancholy sentiment of the poet John Greenleaf Whittier: “Of all the words of tongue or pen / The saddest are these: it might have been.”