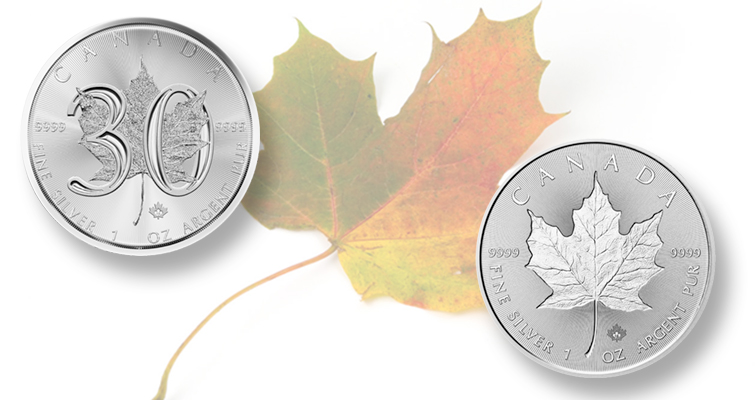 The two new silver coins from the Royal Canadian Mint that mark the 30th anniversary of the silver Maple Leaf utilize the mint's new MINTSHIELD technology designed to reduce the chances the coins will develop white spots on them.

The two new silver coins from the Royal Canadian Mint that mark the 30th anniversary of the silver Maple Leaf utilize the mint's new MINTSHIELD technology designed to reduce the chances the coins will develop white spots on them.

This is a busy period for modern world numismatics, in part because of last week’s World Money Fair held in Berlin, the world’s biggest coin show, which is held in the German city every February.

My colleague Jeff Starck was there and is presenting Coin World’s coverage of the show, but I wanted to mention two points.

First, the micromosaic coin I discussed last week was a big hit, according to Antonello Galletta of Powercoin, who said collectors lined up just to see the coin or take a photo of it.

Second, one of the highlights of the show was the announcement on Feb. 3 of the Coin of the Year Awards, which is a longstanding project organized by Krause Publications

These awards are a great way to bring greater attention to the multitude of interesting and innovative new releases from world mints.

In other news, the Royal Canadian Mint, whose Silver Maple Leaf coins have in the past been known to develop white spots on them, often called “milk spots,” announced “a new proprietary method for reducing the occurrence of white spots on silver bullion coins with a breakthrough innovation called MINTSHIELD surface protection.” The Mint said that all 2018 silver bullion coins utilize the new technology.

This is an encouraging development. The RCM press release noted that laboratory testing designed to simulate long-term use found the method to be successful in resisting spotting compared to coins from other mints that also have this problem.

Of note is also the fact that the Mint said MINTSHIELD reduces and delays the onset of white spots since there is probably no way to prevent them from ever developing in all cases. The proof will come sometime down the road, if RCM coins made from 2018 onward rarely develop spots.

This should also help sales of the two new special Maple Leaf coins designed to honor the 30th anniversary of the world’s second most popular silver bullion coin: the 2018 double incuse silver coin (the first ever that is incused on both sides) and a second coin that features a 30 three-dimensionally superimposed on the maple leaf design, appearing as though a digit dangles from the lobe at either side of the leaf.

Finally, another development concerning the RCM is the announcement that, on December 22 of last year, it filed against the Royal Australian Mint a lawsuit that claims the latter utilized without permission a technology the RCM patented to apply color to its 2012 Remembrance $2 poppy circulating coins as well as a number of other coins issued between 2013 and 2017.

The Canadian Mint first used this technology in 2004 on a circulating 25-cent coin. It differs from the older method of pad printing, which can wear away with time, by creating micropores and macropores (small and larger pores) so that colors adhere to the surface of the metal more effectively.

The RCM said it asked the RAM to stop infringing on this technology in December of 2015 and has asked that all the RAM colored coins in the RAM's possession be returned or destroyed. The RAM has not yet responded according to press coverage of this issue from last month.