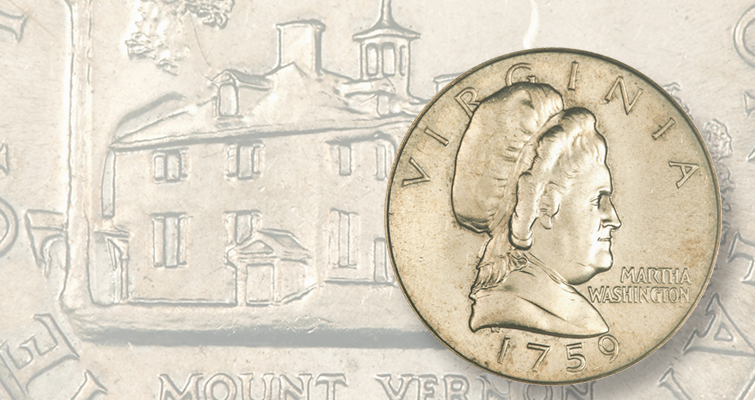 This "1759" Martha Washington “half dollar” test piece is one of several struck by the Mint from four different materials tested for the half-dollar-sized piece, among 17 different preparations created by Battelle Memorial Institute of Columbus, Ohio, during the 1964 search for coinage metal substitutes.

The date on the "1759" Martha Washington “half dollar” test piece marks the year George wed Martha. The piece was one of several struck by the Mint from four different materials used for the half-dollar-sized piece, among 17 different preparations created by Battelle Memorial Institute of Columbus, Ohio, during the 1964 search for silver coinage substitutes. U.S. Mint Sculptor-Engraver Edward R. Grove designed the obverse and signed it with his initials below Martha’s bust.

U.S. Mint Sculptor-Engraver Philip Fowler designed the reverse die used for the 1964 test pieces. His initials appear below the right side of Mount Vernon. 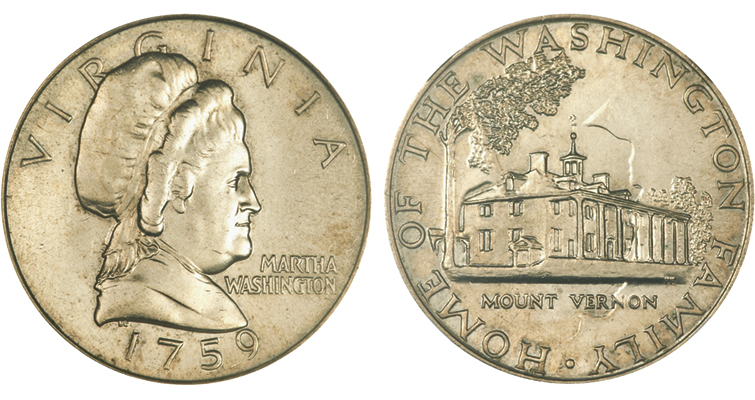 One of the most elusive half dollars doesn’t say half dollar on it and never circulated as money.

In 1964 as the price of silver rose above $1.29 an ounce — the point at which a silver dollar is worth more as metal than as money — the Mint began searching for alternatives.

In its Feb. 12, 1965, “Final Report on A Study of Alloys Suitable for Use as United States Coinage,” Battelle reported, “A number of possible candidate materials were selected and taken to the Philadelphia Mint in the form of rolled strip to determine how well they could be blanked and upset, and coined. ... For the actual coining process, special dies were prepared by the Mint designers and engravers, which would duplicate as nearly as possible both the obverse and reverse design features of a typical dime, quarter, and half-dollar.”

For the Battelle study, the Philadelphia Mint produced “dimes” in 15 metals, ranging from an alloy of 50 percent silver and 50 percent copper to the adopted layered composition of copper-nickel-clad copper. The “quarter dollar” was tested in 17 metals, and the “half dollar” in just four.

The Society of U.S. Pattern Collectors’ website, uspatterns.com, reports the Smithsonian has two blue Lucite blocks, each containing a “dime,” “quarter dollar” and “half dollar.”

The website notes two clad “dimes,” ten clad “quarter dollars,” one nickel “half dollar” and about half a dozen clad “half dollars” are known to exist.

Despite their great rarity, the pieces tend to sell for a few thousand dollars on the rare occasion that they appear at auction. In 2014, one sold for $4,112.50 at a Heritage auction.