Twenty-five years in the ANA? (How did this happen?) 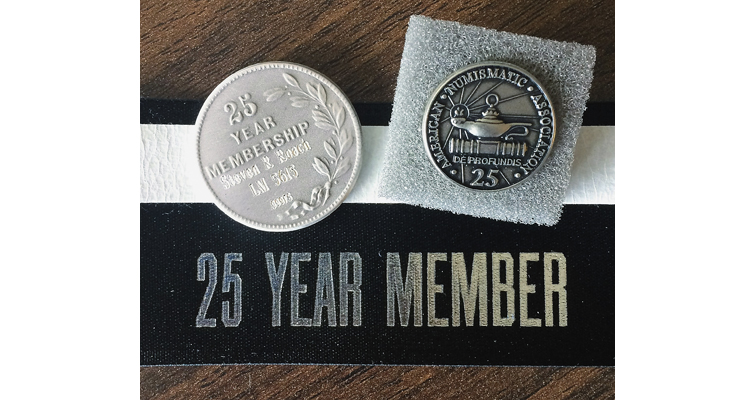 Receiving his 25-year ANA membership pin and medal has Steve Roach thinking about who he was when he joined the ANA in 1991 and what he'll be doing in the hobby and where our hobby will be when he receives his 50-year pin in 2041. One thing he's sure of — the ANA will remain, steady in its dedication to educating and encouraging people to study and collect coins and related items.

The American Numismatic Association World’s Fair of Money has been a summer staple for me since 1994 when my dad took me to my first one in Detroit. That show was close to home and I was overwhelmed by its magnitude. Hundreds of dealers, more educational exhibits than I had ever seen, and every person who I saw pictures of and read about in Coin World were there. I was overwhelmed and fascinated.

Next year followed in Anaheim, where my parents let me go with some coin collecting friends. Denver followed in 1996 and in subsequent years the ANA summer and spring shows have taken me to Portland, Philadelphia, Atlanta, Pittsburgh, Milwaukee, Los Angeles, Boston, Fort Worth, New Orleans and Chicago (a lot).

This year I received my 25-year ANA membership pin and medal. It’s a bit odd to think of who I was when I joined the ANA in 1991 and what I expected from joining at the time. Did I see myself working in coins 25 years later and still being involved with the hobby? Probably not. But I enjoyed the ANA’s magazine, The Numismatist, and appreciated the outreach of ANA leaders like Florence Schook who suggested that I get more involved with the ANA’s Young Numismatist programs.

I absorbed all of the ANA’s YN programs and learned useful lessons in goal setting. Many of the friends I had 20 years ago at the last ANA Anaheim convention remain my friends today, and we have the opportunity to reconnect at the ANA’s shows and the ANA’s Summer Seminar.

On Thursday, August 11, I gave an ANA Money Talks presentation where more than 30 collectors joined me for a roundtable discussion of our hobby and where it’s going. The topic kept coming back to young people and how to get new people in the hobby. Suggestions came from all angles: a numismatic game similar to Pokemon Go for people to “find” and “collect” virtual coins, expanded Boy and Girl Scout programs, more online communities aimed at facilitating connections between collectors, and more.

I don’t have the answers, but I know that our hobby in a decade will look different than it does today. That’s certain. I can’t help but wonder what I’ll think and where our hobby will be when I receive my 50-year pin in 2041. What I know is that the ANA will remain, steady in its dedication to educating and encouraging people to study and collect coins and related items.