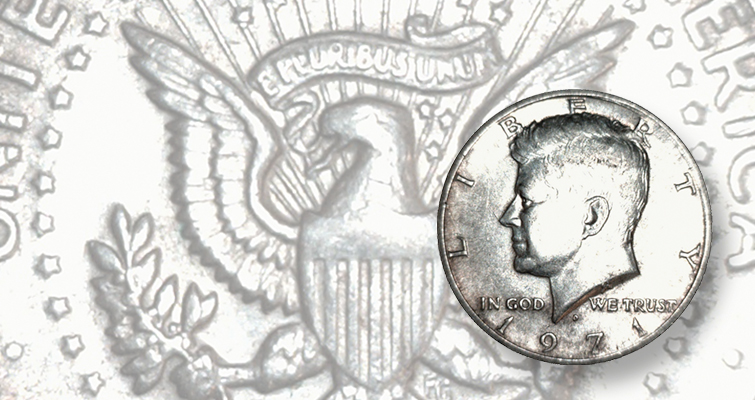 The discovery of a 1971-D Kennedy half dollar transitional error, struck on a silver-copper clad planchet rather than the normal copper-nickel clad composition, is evidence that great finds await discovery.

Transitional errors generally occur when a mint is making a change in composition. They have a coolness level that is hard to match, particularly since they can be found in circulation when the coin’s composition is in the process of being changed, or even discovered years later as with this newly reported piece.

The most famous U.S. transitional errors are the 1943 Lincoln cents struck on copper-alloy planchets from 1942 rather than on the one-year-only zinc-coated steel planchets. Even some in the noncollecting public are at least vaguely aware of the 1943 errors, though many think the steel cent is the error and not the copper one.
The period from 1964 to 1971 offered ample opportunity for the production of transitional errors for the dime, quarter dollar, and half dollar. The switch from 90 percent silver to copper-nickel clad for the dime and quarter dollar, while not popular with collectors, was a financial necessity. Since production of 1964 and 1965 coins continued well past the ends of those two calendar years, even concurrently, planchets of both compositions were on hand, and not surprisingly, coins of either date were struck on the wrong planchets.
The transition of the half dollar was a two-step process. Silver proponents wanted a “prestige coin” to survive, so the half dollar’s alloy was switched to a silver-copper clad composition — with a reduction in silver content to 40 percent from 90 percent. Again, transitional errors became possible as this first switch was made.

The discovery more than 40 years later of a 1971-D Kennedy half dollar presumably struck on a leftover 1970 silver-copper clad planchet is a reminder that great coins can still be found.