Theme matters, but Congress doesn’t get that with commemorative coins 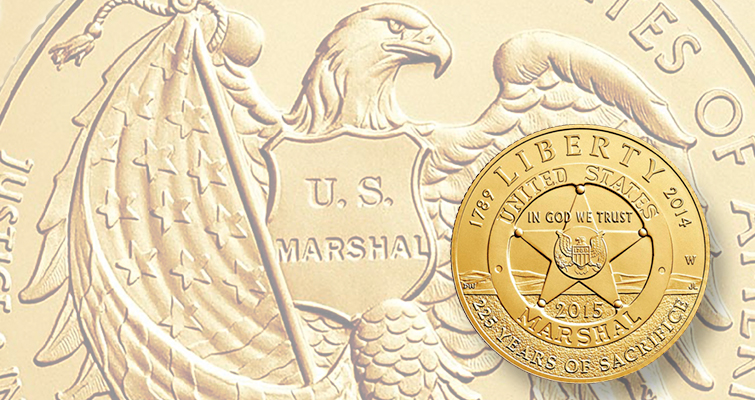 Laudable subjects for commemorative coins do not necessarily translate to strong sales. The 2015 U.S. Marshals Service commemorative coin program has post sales that are well below each coin's maximum mintage.

This has been said before, but it needs to be said again. Congress authorizes too many commemorative coins of limited appeal.
Congress has limited itself to no more than two commemorative coin programs per calendar year since the late 1990s. That’s when wiser heads reined in Congress’ propensity to use collectors as cash cows for whatever project sought funding through the surcharges attached to the prices of commemorative coins. Still, that has not stopped the authorization of programs that were poor choices with little chance of broad collector/public support.
Let’s look at the two 2015 coin programs.
The March of Dimes silver dollar celebrates a laudable theme: the eradication of polio from the United States. But laudable themes do not always translate to strong sales. Sales of the coin have been lackluster at best: as of Sept. 20, Mint customers had purchased 148,343 silver dollars out of a maximum mintage of 500,000 coins, 74,590 of the coins being in the March of Dimes Special Silver set. It is particularly disturbing that the strongest sales have been for the limited edition set (75,000), which contains a Proof March of Dimes silver dollar and two 2015 Roosevelt silver dimes bearing distinctive finishes. It is clear that the collector interest in the set was for the two dimes and not the silver dollar.
The second coin program for the year marks the U.S. Marshals Service and offers a copper-nickel clad half dollar (maximum mintage of 750,000), a silver dollar (500,000 maximum), and a gold $5 half eagle (100,000 maximum). Sales as of Sept. 20 are not even close to those maximums: 98,140 half dollars, 148,325 dollars, and 29,494 half eagles.
Clearly, neither program has drawn the attention of the public like the successful 2014 Baseball Hall of Fame program did; except for a few returns, that program’s gold coin and silver dollar both sold out, and the half dollar sold nearly 58 percent of its maximum. In contrast, sales of the 2014 Civil Rights silver dollar did not even reach 25 percent of
the maximum.
A commemorative coin program’s theme matters. Congress needs to remember that.
Collectors would be better served if the concept of surcharges was simply dropped. Then organizations would have less incentive to approach Congress for funding through commemorative coins sales. And then maybe Congress would, finally, authorize coin programs with themes that have a wide appeal.

Unfortunately, the hobby no longer has a voice in Congress. Frank Annunzio is long gone and his spiritual descendant, Michael Castle, no long serves in the House. Getting change will be hard.

But it is something to strive for. ?