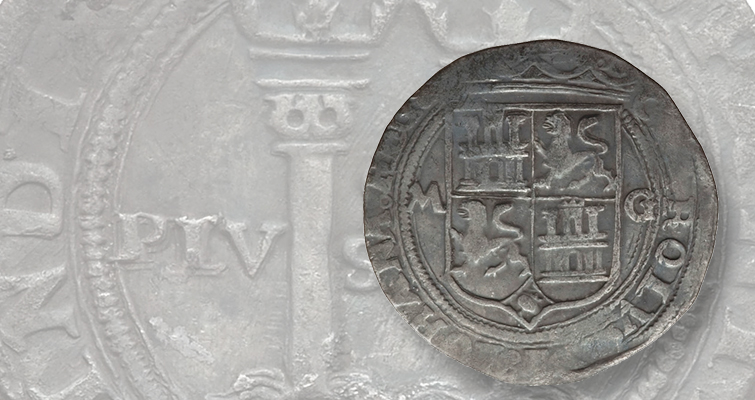 This 2-real coin, issued in the name of Carlos and Johanna, was struck at Mexico City in the mid-16th century. 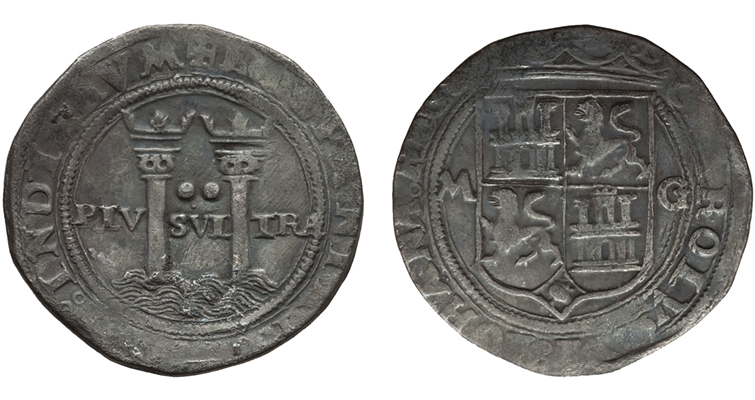 2-real coins, being 1/4 of the value of the silver dollar sized 8-real coins, were the first "quarters."

Previous
Next
The quarter dollar predates the 1792 founding of the United States Mint by more than two centuries.

Less than 50 years after Columbus’ first voyage to America, the Spanish government set up a mint at Mexico City in the 1530s to convert the New World’s vast silver deposits to coin. The largest coin was the silver-dollar size 8-real piece, the forerunner of the United States silver dollar. Spanish Mints throughout Mexico, Central and South America also coined subdivisions of the piece of eight — ¼-. ½-, 1-, 2-, 3- and 4-real pieces.

All of them found their way into the English colonies and later the United States where merchants often kept accounts in three formats at the same time — decimal United States coins, English pounds, shillings and pence and Spanish 8 reals.

For years, Spanish pieces formed the bulk of the circulating coins in the United States. Surviving coins are frequently found worn almost smooth from decades of circulation

Foreign coins were legal tender in the United States until 1857, when the federal government seized upon the worn coins as a way to ease acceptance and circulation of the new small cents.

Many of the Spanish colonial coins were lightweight from extensive wear or even counterfeit. Bullion merchants valued them by weight, but still they continued to circulate at full face value for years for want of an alternative. It made no difference to the Mint. On May 25, 1857, the Mint set up stands on the its grounds where clerks paid out canvas bags of 500 new Flying Eagle cents for $5 face value of Spanish coins or $5 worth of old large cents and half cents.

More than 1,000 people reportedly turned up to exchange Spanish silver and obsolete U.S. coins for the new copper-nickel cents. When the clock on Independence Hall struck 9 a.m., the crowd surged forward.

Remnants of the Spanish system still survive. Until 2001, stock prices on American stock exchanges were quoted by the 1/8th or 1 real. Even today, the quarter-dollar is widely known as two bits for its Spanish value of 2 real.

Next: Too soon for Tennessee