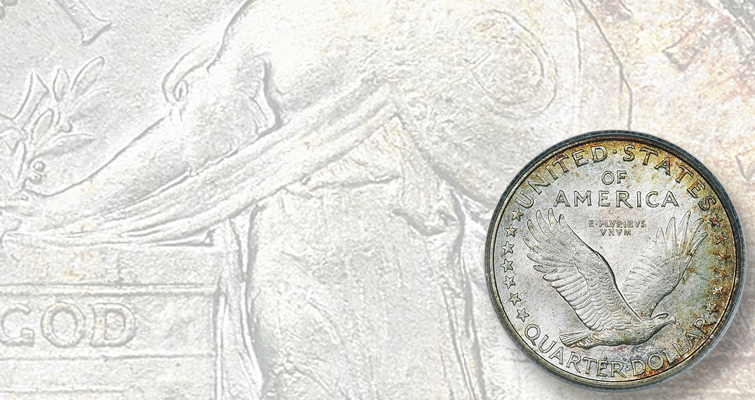 This 1916 quarter dollar shows Miss Liberty with a full head and uncovered breast.

For 101 years, every 12-year-old boy in America has aspired to own a 1916 Standing Liberty quarter dollar. Liberty on 1916 and early 1917 quarter dollars has a bare breast.

Researcher Walter Breen noted that fully struck examples showed not only Miss Liberty’s nipple but the areola surrounding it.

In 1917, the coin was modified to place chainmail – fitting for a country entering World War I – on Miss Liberty’s top and three stars below the eagle on the reverse.

Why the offending breast was covered has been the subject of speculation and declaration over the decades.

Breen maintained, the “Society for the Suppression of Vice, the guardians of prudery once began exerting political pressure on the Treasury Department to revoke authorization for these ‘immoral’ coins, and to withdraw them from circulation.”

The problem with Breen’s explanation is that no evidence supports it. The pressure, if it existed, did not garner any publicity in the day’s newspapers.

A 2005 Heritage Auctions catalog entry for an NGC MS-67 1916 quarter dollar that fetched $97,750, attributed the change to a politician seeking advancement.

The catalog notes, “[T]he real culprit was actually [Treasury Secretary William G.] McAdoo himself, who had married President Woodrow Wilson's daughter in 1914. Through this familial alliance, as well as his position as Secretary of the Treasury, McAdoo hoped to springboard himself into the White House after Wilson stepped down. However trivial the complaints from the Society for the Suppression of Vice may have seemed to many Americans, an aspiring politician such as McAdoo could not afford to ignore them.”

Or, it might just be that coin designer Hermon Atkins MacNeil changed his mind.

MacNeil was not happy with modifications Charles E. Barber had made to the coin and asked permission in early 1917 to rework the design.

Miss Liberty was wearing chainmail on MacNeil’s next effort, delivered in mid-February, 1917.

In 2016 the Mint struck a gold version of the coin to mark its centennial. That coin shows a fully liberated, anatomically correct Miss Liberty.