The case of the missing signature 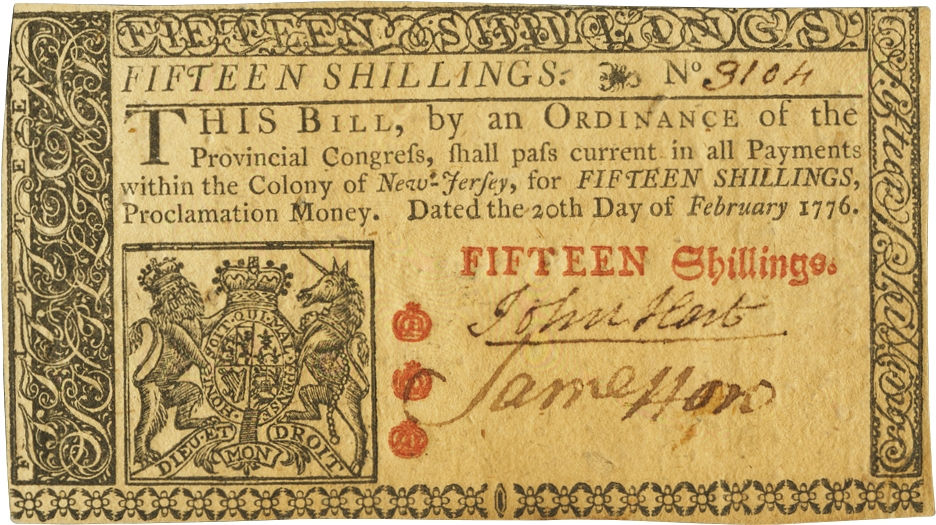 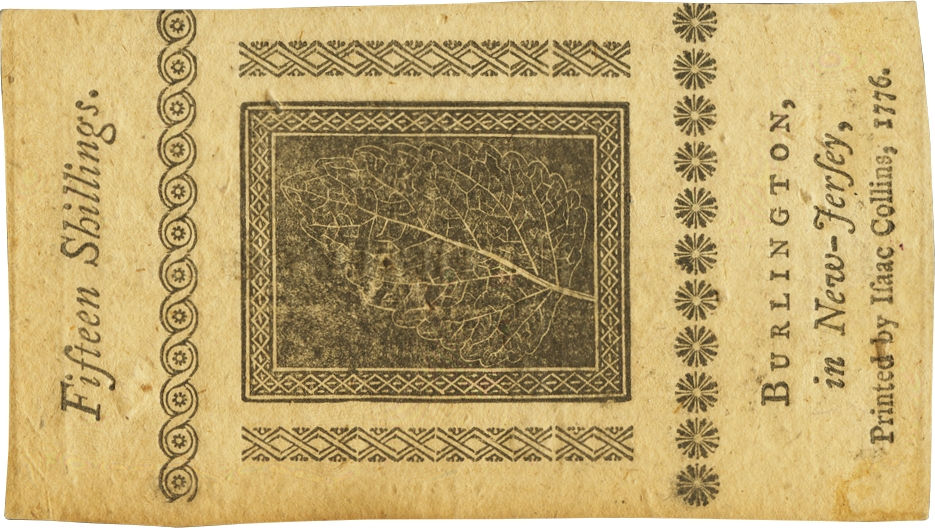 Back of the raid note. This PCGS New 62, Feb. 20, 1776, New Jersey 15 shilling note sold for $2,056 at auction at the Central States Numismatic Society sale in April – about twice as much as a note with all three signatures on the face. Image courtesy of Heritage Auctions.

The Provincial Congress of New Jersey authorized a 30,000-pound (later raised to 50,000 pounds) paper money issue Feb. 20, 1776. Nineteen people were authorized to sign the bills, and each bill had to be signed by three men before being released into circulation.

John Hart, a signer of the Declaration of Independence, was one of the signers. Notes signed by him command a premium of several hundred dollars over other New Jersey notes. Hart, for his part, was paid £12 10s & 10d by New Jersey to sign 15,600 notes.

In late 1776, notes that had been signed by two people – Hart and Samuel How – were sitting in the state’s treasury awaiting the third signature. As the British advanced on Trenton, the treasury, consisting of fully signed bills and partially signed ones, was moved to John Abbot’s farm.

On Dec. 9, 1776, British Lt. Thomas Hawkshaw in command of 20 troops searched the farmhouse after being tipped off by a loyalist local. They found the partially signed bills, but not the fully signed ones.

Colonial Williamsburg reports, “Apparently the British released these non-monetized notes into circulation, no doubt as a form of economic warfare. A warning against the acceptance of these incompletely-signed notes appeared in the Pennsylvania Journal.”

The Feb. 26, 1777, article read, “The PUBLIC are hereby cautioned not to receive any of the Paper Bills emitted by the Convention of the State of New-Jersey, dated the 20th of February, 1776, unless they have three signers names thereto; as a quantity of those Bills were plundered by the enemy from one of the person’s appointed by the said Convention to sign them, before he had put his name to the same; some of which have been since circulated through New-Jersey and Pennsylvania. As they are not perfect, and of consequence not a legal tender, and being the property of the State of New-Jersey, the public are requested to stop such as are offered in payment.

N.B. [Nota bene, that is, “note well”:] The names of the two persons who have signed the said Bills, are JOHN HART and SAMUEL HOW.”

The bills, called raid notes by collectors, are especially prized. They are dated 1776, were signed by a signer of the Declaration of Independence, and played a real part in the Revolutionary War.

Raid notes typically command a premium of two to three times the value of notes with all three signatures. Less is more when it comes to Colonial paper money. (Note to grammarians: Get over it. “Less” works better than “fewer” in this entry.)

Next: A crippled buffalo