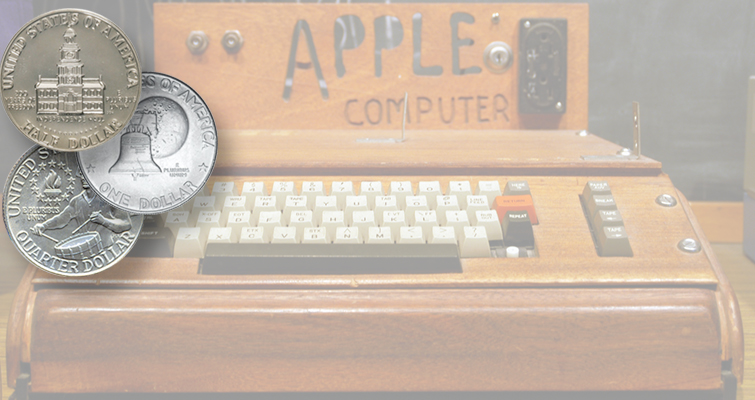 Coin images from Coin World files; Apple I on display at the Smithsonian image courtesy of Ed Uthman/Wikimedia. 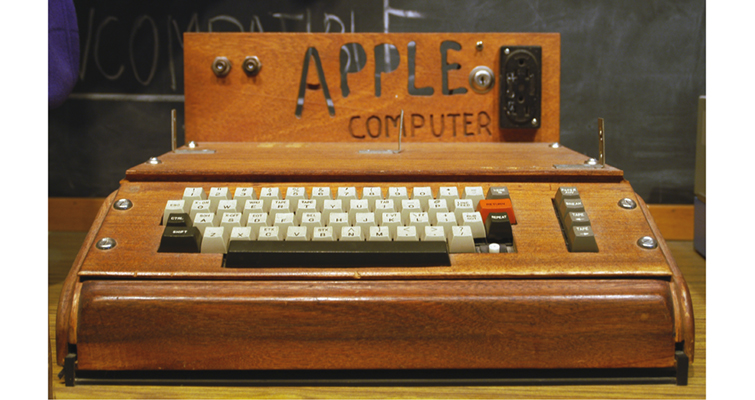 In July of 1976, the Apple I computer went on sale for $666.66 at the Byte Shop in Mountain View, Calif. Those first machines are collector’s items now, valued at hundreds of thousands, more than 300 times their original selling prices.

Apple I on display at the Smithsonian image courtesy of Ed Uthman/Wikimedia.

The U.S. Mint ended a20-year drought for commemorative coin collectors in the mid-1970s when itagreed to produce quarter dollars, half dollars and dollars marking the 1976Bicentennial of the United States.

In 1975, the Mintceased producing regular-issue quarters, halves and dollars and switched to thedual-dated 1776-1976 coins. The coins, especially the quarter with its colonialdrummer, were wildly popular. Mintages ran into the hundreds of millions.Today, all three coins are common, and the quarter dollars still circulate.

The coins were producedat a time of ruinous inflation. The Eisenhower Bicentennial dollar was worththe equivalent of $4.23 in today’s money. Americans had been freed to own golda couple years before, and the price of the precious metal was rising. In 1976,an ounce of gold was worth about $135, roughly 1/10th of its current value.

Here are some of thethings you could buy with those coins on July 5, 1976, according toadvertisements in that day’s Pittsburgh Press.

The G.C. Murphy Co.,which operated stores on main streets across the country until the 1980s, wasadvertising 12-exposure Kodacolor II C-110 film for 99 cents a roll, disposablebutane lighters for 72 cents, a 60-diaper box of Murphy-brand disposablediapers tor $2.97 and a 20-inch, 3-horsepower lawnmower for $59.

In the travel section,Atlantic City’s Summit Hotel, which was “100 percent air conditioned,” wasadvertising rooms for $9 a night, double occupancy. The Tides hotel was adollar cheaper.

That same month, butnot in Pittsburgh, the Apple I computer went on sale for $666.66 at the ByteShop in Mountain View, Calif. Those first machines are collector’s items now,selling for hundreds of thousands.

A Bicentennial dollarput away in 1976 has a purchasing power of only about a quarter dollar now.Gold is worth about 10 times its 1976 value. And an Apple I computer is worthabout 300 times its original selling price.