Storage can have an effect 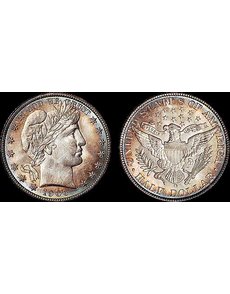 Gorgeous iridescent “album” or “halo” toning of the type acquired by storing silver coins in cardboard album pages appears on this 1906-O Barber half dollar. Such toning, if attractive, can add great value to a coin.

On April 17, the Professional Numismatists Guild membership voted to adopt a definition, below, for “coin doctoring,” or the changing of the appearance of a collectible coin by various processes.

“Coin doctoring refers to the alteration of any portion of a coin, when that process includes any of the following:

“1) Movement, addition to, or otherwise altering of metal, so that a coin appears to be in a better state of preservation, or more valuable than it otherwise would be. A few examples are plugging, whizzing, polishing, engraving, ‘lasering’ and adding or removing mint marks.

“2) Addition of any substance to a coin so that it appears to be in a better state of preservation or more valuable than it otherwise would be. The use of solvents and/or commercially available dilute acids, such as Jeweluster, by qualified professionals is not considered coin doctoring.

“3) Intentional exposure of a coin to any chemicals, substances, or processes which impart toning, such that the coin appears to be in a better state of preservation or more valuable than it otherwise would be. Naturally occurring toning imparted during long-term storage using established/traditional methods, such as coin albums, rolls, flips, or envelopes, does not constitute coin doctoring.”

In my opinion, this is a good start. However, it is dangerous to make too many rules lest those making them be trapped in a corner. “Long-term storage” is mentioned, but how long is long? And, what about “short-term storage”?

In my December 2010 column, I mentioned that I had just received a newly-struck silver medal and was looking at it in my office when a visitor came in. I opened a drawer on a recently purchased oak side table, placed the medal there, and closed the drawer and forgot about it. A month or so later I opened the drawer to see the most beautiful electric blue toning imaginable. Was this artificial toning? What do you think?

Old-timers know that silver coins kept in cardboard Raymond “National” or Meghrig holders tend to tone inward over a period of time. This is due to the presence of sulfur in the cardboard. “Album toning” or “halo toning,” as it is sometimes called, can add great value to a coin. Realizing this a dealer told me that he took bright silver coins, mounted them in such holders, then put them in an oven set at a temperature somewhat over 100 degrees. Beautiful rainbow toning resulted after a short “baking.” Was this artificial toning? What do you think?