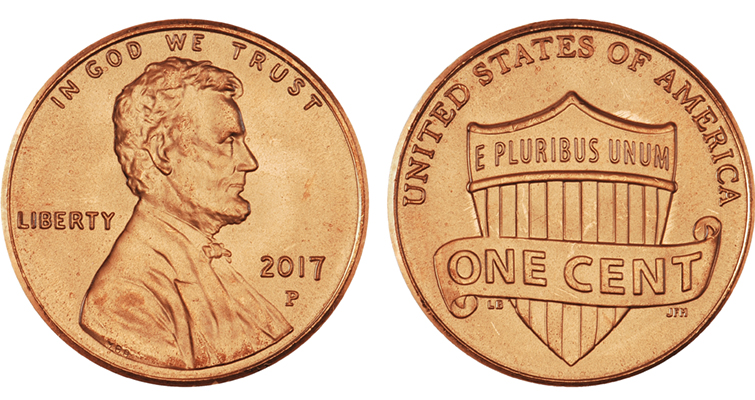 2017-P Lincoln cents began showing up in circulation in Coin World's home city of Sidney, Ohio, during the first week of March.

When I first reported early in January that the U.S.Mint was striking 2017-P Lincoln cents bearing the Philadelphia Mint’s P Mint mark for the first time in the bureau’s 225-year history, I wondered how long it would take me to find examples here in Coin World’s home city of Sidney, Ohio.

Two months to be exact. I came across my first one March 7 at the local Tim Horton’s fast-food restaurant. I checked with the cashier to see if they had any more in their cash register, but no luck.

I did happen to find five more 2017-P Lincoln cents in a change jar sitting on the counter next to the register. I politely asked if I could swap out to the one-year type cents with older ones. I think the cashier thought I was nuts, but she agreed after talking to the manager.

The P Mint mark was added to the Lincoln cent for circulation strikes and the cents to be included in the 2017 Uncirculated Mint set, as part of the Mint’s year-long celebration of its 225th anniversary.

The circulation strikes are coins collectors can add to their collections at face value. They’re likely not going to appreciate in value, since it’s anticipated the Philadelphia Mint will be striking billions of them.

Since my reporting of the Mint’s unannounced decision to add the P Mint mark, I’ve checked with the staff working the registers at many of the places which I frequent or do business in searching for the cents — McDonald’s, Wal Mart, Walgreen’s, Kroger supermarket, and any restaurant.

I also regularly checked a half dozen or so bank outlets.

I tried to educate those I encountered about what I was looking for and why, in hopes that I may make a collector or two in the process.

While trying to spread a little knowledge and being mostly greeted with blank stares, I learned a little lesson of my own. All of the coin handlers I dealt with, including the bank tellers, had no clue about the coins they received or dispensed. They paid no attention to the coin designs, date, Mint mark, or lack thereof. They just looked at the color and diameter and took it from there.

I wonder why the Mint didn’t disclose they were adding the Mint mark and just spend a few dollars educating the public on the nation’s smallest denomination and most encountered coin. Maybe such a small gesture would be enough to spark an interest for a whole new generation of collectors. The hobby needs the boost.