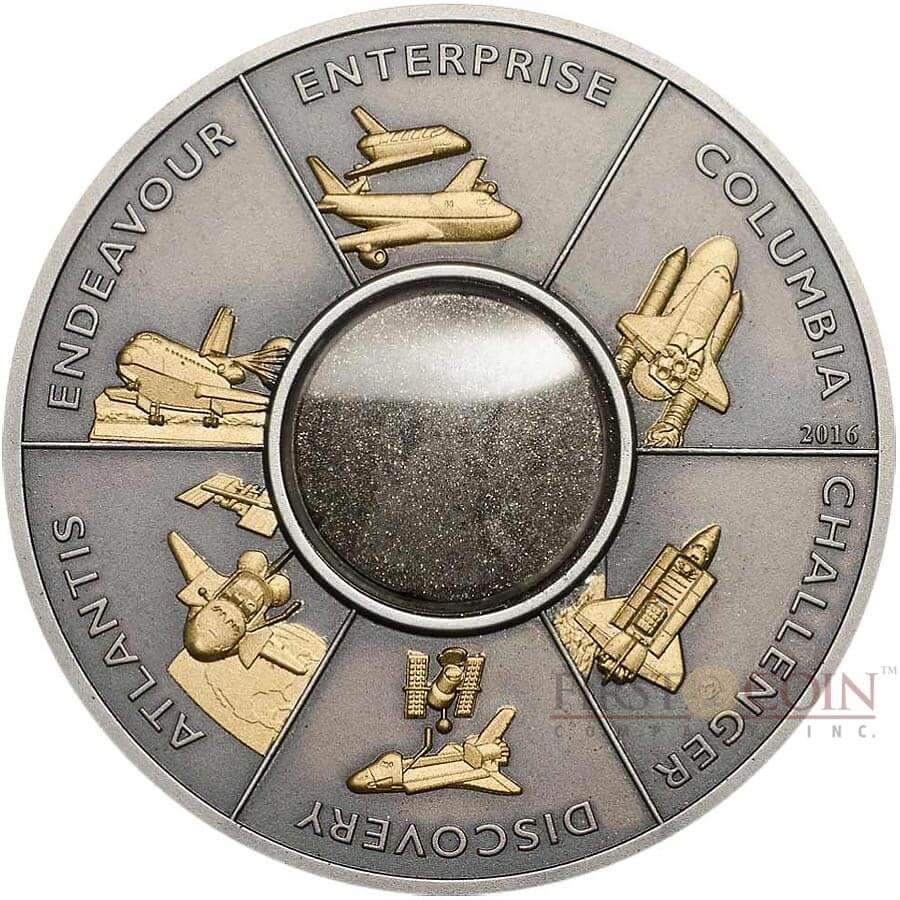 The reverse side of the Cook Islands new Space Shuttles coin includes gold-plated images of each of the shuttles during their missions. The gold stands out nicely against the antique silver background. 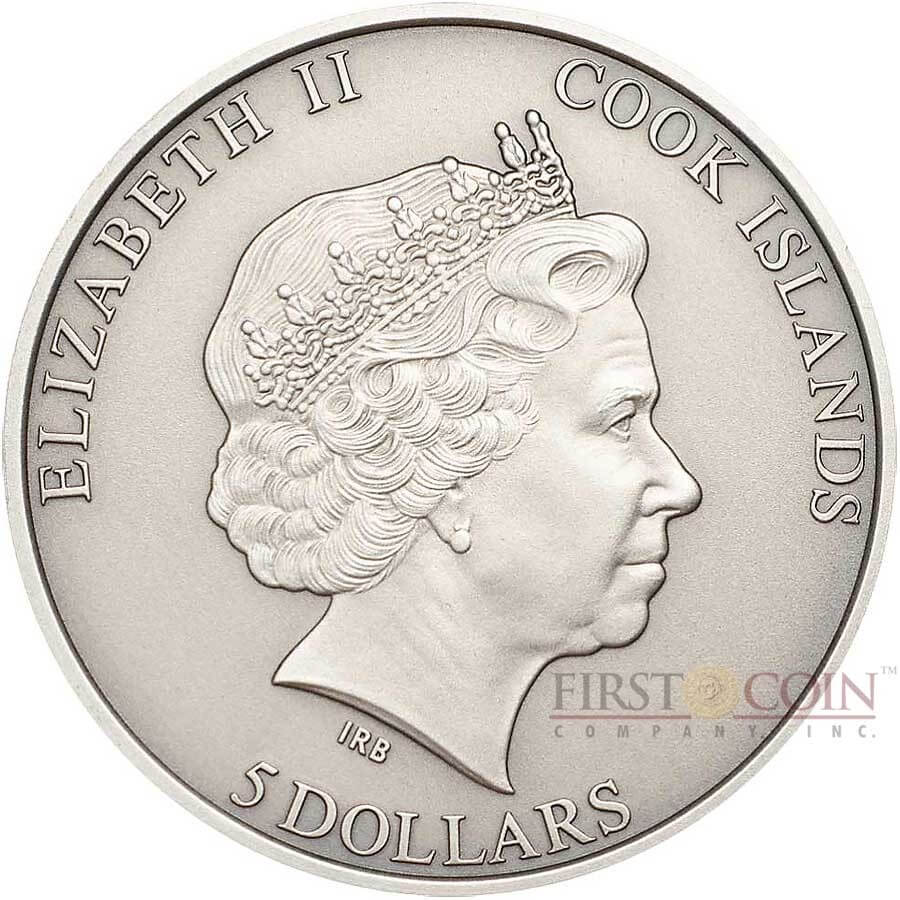 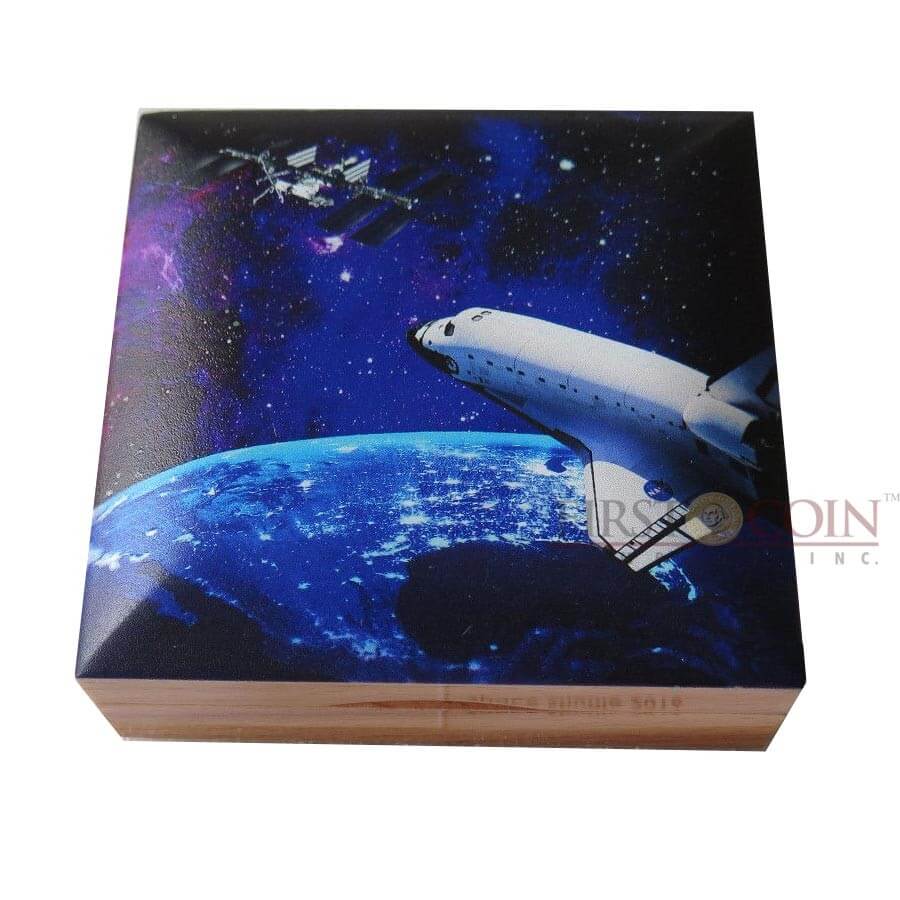 The wooden box that holds the new Cook Islands Space Shuttles coin displays a colorful image of a space shuttle in space.

Like many Americans who were big fans of NASA’s Space Shuttle, I was saddened to learn the program would end in 2012.

There is a cool new premium $5 coin for space enthusiasts from the Cook Islands that pays tribute to each of the six Space Shuttles that flew 135 missions between 1976 and 2011. And it has something very special inside each coin: actual flown space material, which includes, for example, thermal insulation, flown metal pins from the space shuttle payload bay, flown bolts, flown nuts and flown washers.

Everything was ground into a powder-like mixture with some larger pieces.

The format of this coin is one that collectors of high-end modern world issues are familiar with: an antique silver finish and selective gold plating. The reverse side includes images of each of the shuttles during their missions plated with gold, which stands out nicely against the antique silver background. At the center of the coin is the ground-up space-flown material in a capsule.

As a coin issued by a British commonwealth nation, the obverse carries the Ian-Rank Broadley effigy of Queen Elizabeth II.

The coin is made of one ounce of .999 fine silver and has mintage of just 500 coins. The coin comes with a numbered certificate of authenticity that also explains that the flown material is real, and it is housed in a wooden box with a colorful image of a space shuttle in space.

It is available from First Coin Company here http://www.firstcoincompany.com, an official distributor for the coin, for $219.90 with free worldwide shipping and refund of any customs or import fees if you are assessed any. A representative of the company said he expects the price to rise.

He also said the coin should ship within a week of when your order is placed. Here is a direct link to the company’s page for this item.

For those who think they might be able to get it cheaper on eBay, the coin’s manufacturer is requiring all distributors that sell the coin on eBay not to offer it in auctions and sell it only as a Buy It Now item.

There are several current listings for the coin at $249.95 or best offer plus shipping.

Here is an overview of the history of the Space Shuttle program:

ENTERPRISE: Designated OV-101, Enterprise was the prototype shuttle and rolled out for the first time on Sept. 17, 1976. Built without engines or a working heat shield for use as a test-bed, she was originally meant to be retrofitted for spaceflight, but design changes and other cheaper options meant it wasn’t to be. She was restored and placed on display at the Smithsonian in Virginia until 2012 when she was moved to the Intrepid Sea, Air & Space Museum in New York.

COLUMBIA: The second to be built but the first space-rated orbiter, Columbia, designated OV-102, launched for the first time on mission STS-1 on April 12, 1981. In the next 22 years, she completed 27 missions but disintegrated during re-entry on mission STS-107 on Feb. 1, 2003, killing all seven members of the crew.

CHALLENGER: The second space-rated orbiter, Challenger (OV-099) had its maiden flight on April 4, 1983. She made nine flights successfully before breaking up 73 seconds after launch on the tenth, STS-51L on Jan. 28, 1986. The crew of seven was killed and the shuttle fleet grounded for two and a half years as a result.

DISCOVERY: After her first flight on Aug. 30, 1984, OV-103 went on to complete 39 missions in the next 27 years. She was the first shuttle to retire, having undertaken more spaceflights than any other vehicle, including lifting the Hubble telescope and International Space Station parts into orbit. Her last mission was STS-133 on Feb. 24, 2011. Discovery now lives in the Smithsonian Institution’s National Air and Space Museum.

ATLANTIS: Given the designation OV-104, Atlantis first flew on mission STS-51-J between Oct. 3 and 7, 1985. She undertook the final ever shuttle mission (STS-135), her 33rd, on July 8, 2011. Over a successful career, Atlantis had orbited the Earth 4,848 times, covering a staggering 126 million miles. She is displayed at the Kennedy Space Center Visitor Complex.

ENDEAVOUR: The fifth and final space-worthy shuttle to be built (OV-105), Endeavour was constructed partly from spares to replace the tragically lost Challenger. She undertook 25 missions between May 1992 (STS-49) and May 2011 (STS-134). She was named after the British ship Endeavour (hence the British spelling), the vessel which took Captain Cook on his first voyage of exploration. There was even a piece of wood from Cook's ship in the cockpit. She currently resides at the California Science Center awaiting a new display.