Sleeping bear needs to come out of hibernation 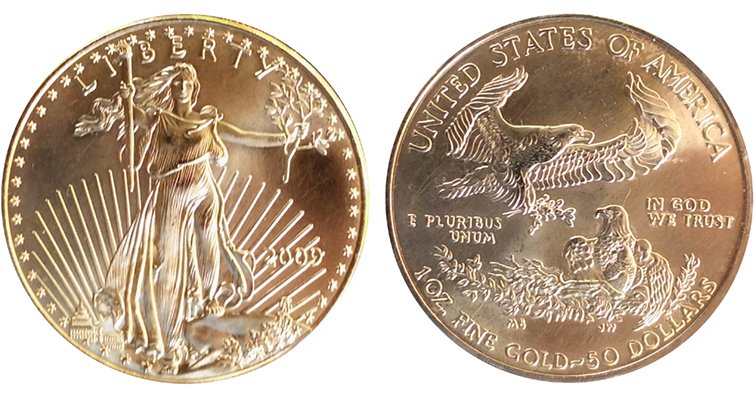 This piece, with the general appearance of a 2009 American Eagle gold $50 coin, is actually a base metal counterfeit that was included among other counterfeits and genuine coins submitted to a dealer for sale.

Counterfeit United States coins, including bullion issues, have been infiltrating the American market on an ever-increasing basis for nearly a decade with little or no intervention from the federal government.

Two congressmen, Reps. Alex Mooney from West Virginia and Frank Lucas, an avid coin collector from Oklahoma, are seeking answers from the U.S. Mint and Secret Service as to what measures are being taken to stem the tide of the fake coins entering the American economy from China and elsewhere.

The congressmen are also seeking answers as to what the Mint is doing with technology to ensure the integrity of coinage products produced by the U.S. Mint.

Lucas and Mooney were prompted to action based on the tireless efforts of the Industry Council for Tangible Assets’ Anti-Counterfeiting Task Force, and its director of anti-counterfeiting, former Coin World editor Beth Deisher.

David J. Ryder, the 34th director of the U.S. Mint and President Trump’s pick to become the 39th, said during his nomination hearing that anti-counterfeit initiatives would be among his top priorities if confirmed.

And Ryder has the credentials to back it up, with 25 years since his first tenure as Mint director spent working in coin and paper money security.

illustrated above, a plated base metal counterfeit of a 2009-dated American Eagle gold bullion, is just one example of the type of fakes that have entered the marketplace.

Tackling the proliferation of United States counterfeit coins has been largely ignored for way too long. It’s time the sleeping bear wakes up and takes action before the problem gets any worse.