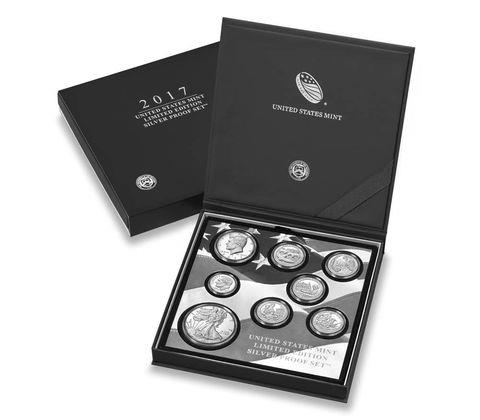 The 2017 Limited Edition Silver Proof set was available from the Mint for more than a month before being declared sold out, even though it included the 2017-S Proof American Eagle silver dollar coin. Many buyers were unable to obtain that coin in the spring, when it was first offered as an individual coin in the Mint’s Congratulations set, because it sold out so quickly in that format.

American Eagle silver dollars have always had a dual appeal for buyers as stackable government-backed silver and as collectibles, though initially that was only the case with the Proof coins.

Over time, as the bullion coins were graded in large numbers and as more people began assembling date sets of the Mint State coins, the series has become the most widely collected silver bullion coin in the country, if not the world.

It is also such an accessible series when limited to the bullion coins (either ungraded or in Mint State 69-graded examples) that it has helped spur newer collectors to get into numismatics and to branch out to other areas of the hobby.

But as the series approaches its 32nd year with the January release of the 2018 bullion coins, it is time for the Mint, in conjunction with its congressional oversight committees, to explore ways to breathe new life into the series.

One sign that this is needed is the sharp decline in sales of the bullion coins in 2017 as well as the, so far, small number of 2017-W burnished coins sold. Another sign is the long time it took (over a month) for the 2017 Limited Edition Silver Proof set to sell out, even though it included the low-mintage 2017-S Proof.

Next year the Mint plans to offer Proof coins struck at the West Point and San Francisco Mint facilities, as it did this year, and both coins will be offered individually, which presumably means the 2018-S coin will have an unlimited mintage, as the West Point Mint Proof coins do, and likely also be included in the 2018 Limited Edition Silver Proof set (which also means the 2018-S will have a much higher mintage than the 2017-S Proof).

I suspect the Mint’s decision to offer San Francisco Mint Proof coins has something to do with declining bullion sales.

In addition, I quite often hear those who collect the entire series, or the various collector versions, say things like 1) new or different finishes are okay, but that idea gets old after a while, and 2) something bolder is needed, such as a new design, either for the whole series, or some segment of it.

The Mint declined a longstanding proposal from the CCAC a couple years back to change the reverse design to a flying eagle image that was then used on the 2015-W $100 American Liberty gold coin and the 2016 American Liberty silver medals.

Collectors were divided on the idea, though many said they favored it, but in the end the Mint opted to leave things as they are, probably out of concern that a new reverse could hurt sales of its flagship bullion coins.

But maybe the opposite is the case, i.e., that buyers want to see a new design at least on the reverse, which has never been as popular as the obverse, or perhaps a different design each year on the Proof or burnished coins.

Other options include a 5- or 10-ounce version, as many mints issue of their bullion coins, or a high-relief coin that so many have called for.

All things considered, unless some of these options are explored, sales will likely continue to trend downward, as they have for many other products from the Mint.