Silver American Eagle sales down sharply: Does it matter? 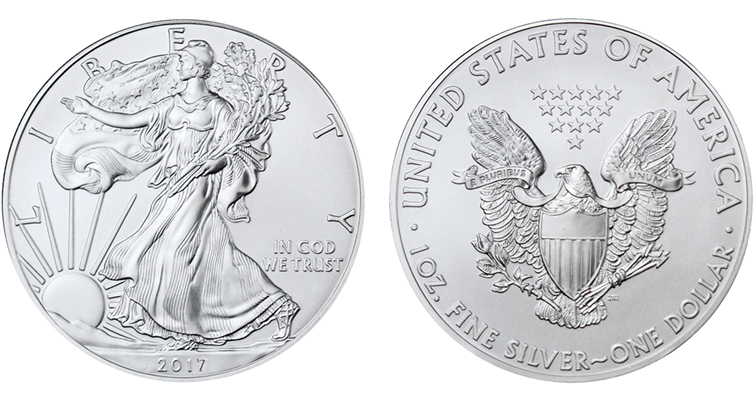 Between 2013 and 2016 U.S. Mint sales of American Silver Eagle bullion coins at this point in the year were close to 20 million, and annual sales were more than twice that.

But this year sales are down sharply with cumulative sales through April of only 8,792,500 coins, or less than half last year’s at this point, which was just under 19 million.

It is hard to say why precisely this is happening, and it is rather surprising given spot silver prices, which have recently been around $16 an ounce, which is about $ 2.50 less than they were at the beginning of March.

Perhaps the explanation is that, as often happens, buyers tend to reduce their purchases in a declining market, while they increase when prices are rising out of fear they will have to pay more later. This runs in opposition to the old adage to buy low and sell high, but there is something about human nature that seems to lead metal buyers to often do the opposite.

Or perhaps they are bullish on the economy given recent unemployment and consumer confidence levels, which have been very good, and think recent low economic growth figures are an anomaly.  In that case they may expect silver to be even cheaper later.

The Perth Mint in Australia has also seen a big drop on silver sales this year.

The situation with sales of eagles has led some people to wonder if the 2017 coins might end up being a lower-mintage issue with some potential for a premium.

That is possible but seems unlikely for several reasons. First, while some silver watchers have extrapolated from current sales figures an estimate for the year of around 20 million coins, many things can happen between now and the end of the year to upend that projection.

This seems especially likely at a time of greatly heightened geopolitical tension around the world and given the domestic political situation in the U.S. that some already call a constitutional crisis. Not to mention that world trade could be jeopardized by some of the proposals being floated by the U.S. administration.

In addition, even if sales came in at a level as low as around 20 million, I doubt that would have much impact on values, other than perhaps on retail prices charged by dealers, which might be a little higher.

My local dealer has often told me that for the entire bullion series, only the 1986 and 1996 issues really command a premium, though I have not talked to him since the news about the 2015 (P) graded coins with a mintage of under 80,000.

The bottom line is that silver looks attractive at current levels to me, so it is probably a good time to buy some 2017 eagles if they are priced right, but I would not have much expectation of an aftermarket premium for these coins.