Should Franklin Roosevelt be taken off the U.S. dime? 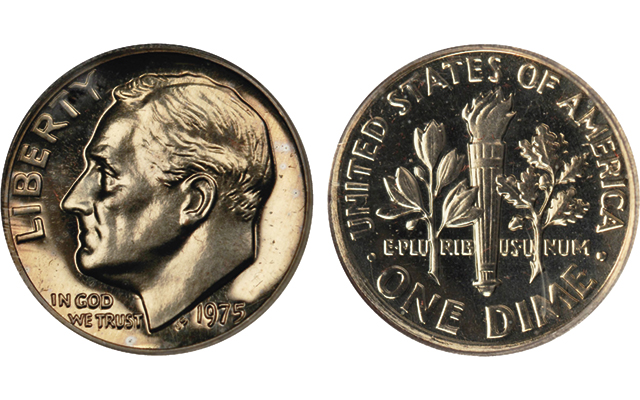 Pictured here is a Proof 1975-S Roosevelt, No S dime, one of the rarest Roosevelt dimes. Is the coin in need of a change?

The Roosevelt dime is the only circulating U.S. coin that has not gone through a redesign. Do you think it should be redesigned, and if so, who of these individuals would you prefer to see on the coin?

Coin World’s most recent poll question about the future of the U.S. dime and who should grace it has gotten plenty of response this week, both quantitative and qualitative.

In terms of the quantitative, poll voters so far are leaning toward Lady Liberty as Franklin Roosevelt’s successor. As of 1:52 p.m. Eastern Time on Friday, Oct. 3, 27 percent of voters said Liberty should be put on a redesigned dime.

Twenty-six percent of voters said the Roosevelt design should not be changed, while 24 percent voted for Ronald Reagan as a replacement.

A new Franklin Roosevelt portrait had the support of 12 percent of voters, and 11 percent wanted the likeness of an elder Roosevelt, Theodore, to take over on the 10-cent piece.

As for the qualitative feedback, our Facebook fans have chimed in, and here are a few of their responses:

What do you think should happen with the U.S. dime? Vote in our Coin World poll and then explain your vote on Facebook!