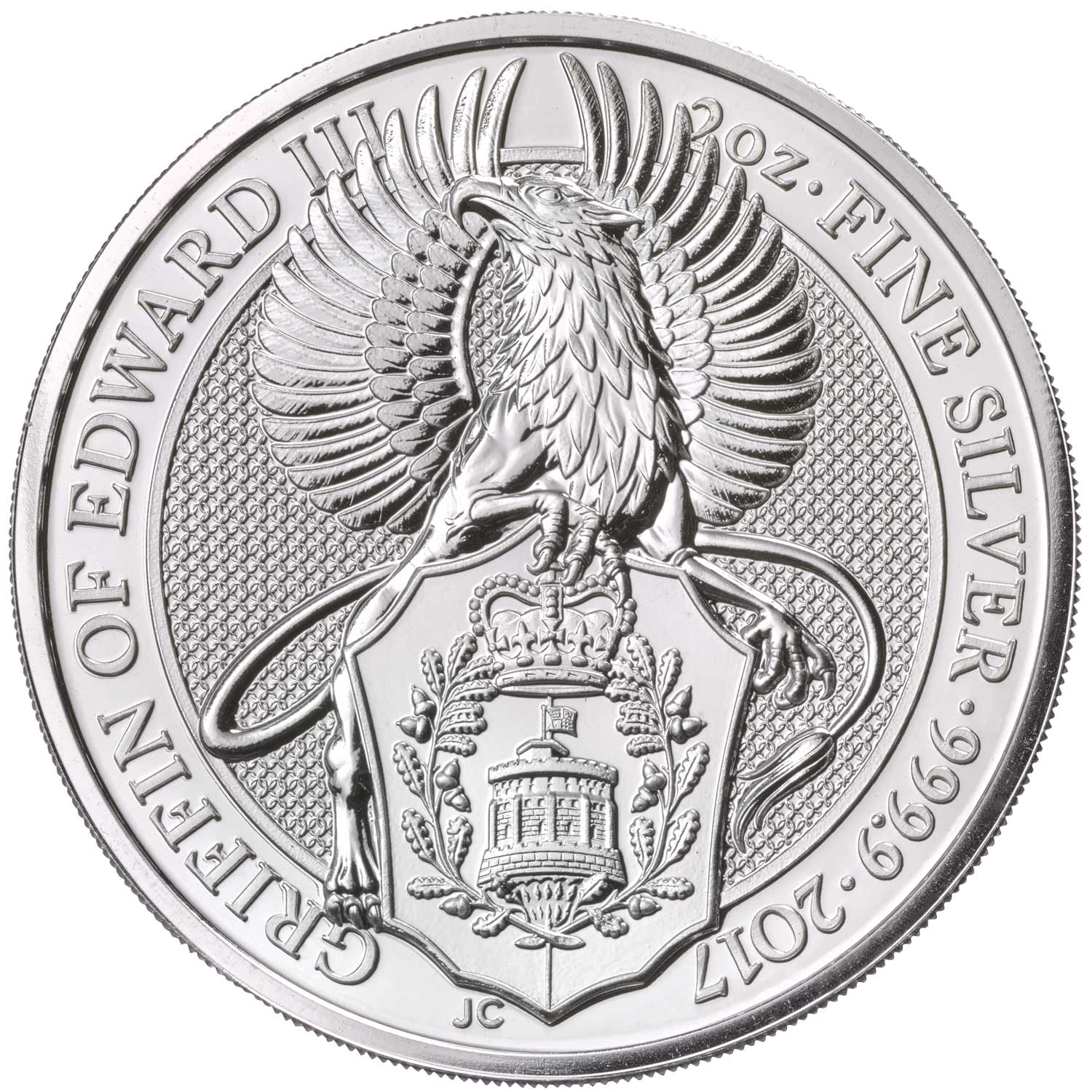 2017 2-ounce silver Griffin from the Royal Mint. The coin is also offered in gold in 1-ounce and 1/4-ounce sizes.

In March, as discussed here, the first coin in the Royal Mint’s 10-coin series of silver and gold bullion coins, which depicts a lion, was released.  The lion was issued in three versions: a 1/4 -ounce gold, 1-ounce gold, and a 2-ounce silver piedfort (extra thick) rather than making it a larger diameter coin such as Perth’s 2-ounce silver Lunar pieces.

Those coins were initially only available either directly from the mint for those who set up a bullion trading account, and from some sellers on eBay.

As I wrote in a subsequent article, the prices those resellers were charging seemed exorbitant to me, and I suggested that buyers, especially those interested in the silver coins, wait until major U.S. bullion distributors had the coins in stock.  That happened a few months later, and instead of having to pay as much as close to $100, the silver coins were readily available for under $50.

The second issue in this stunning series that is based on a series of statues that depict the lineage of Queen Elizabeth II, which are currently in the Canadian Museum of History, depicts a griffin and will be launched on December 9.

A griffin is a “legendary creature with the body, tail, and back legs of a lion; the head and wings of an eagle; and an eagle's talons as its front feet,” according to Wikipedia.

Both the lion and griffin and the next 8 designs are all the work of British medallic artist, Jody Clark, who also created the current and fifth official effigy of the Queen that appears on UK coins.  He is also the creator of the amazing 2014 Britannia proof coins and is widely admired as perhaps the mint’s best artist.

Thankfully for buyers, this time major U.S. dealers like APMEX, J.M. Bullion, and Provident Metals, are taking pre-orders for the coins based on recently-reduced silver prices, making them around $40 each, or only about $6 over melt.

They are also accepting pre-orders for the 1-ounce gold coins at rather low premiums over melt in most cases.

And the 1/4-ounce gold version will be offered as well, plus a new, 1/10th-ounce gold coin too.

One other issue to consider is that a good number of the silver lions arrived with some combination of abrasions and/or milk spots in many cases, and some of the ones I purchased from different sources were that way.  However, others were fine.

Only a tiny number of the silver coins graded at MS70 and have been sold at huge premiums, but MS69 examples were available for only about $25 more than raw coins for those who waited until the lions were widely available.

I would suggest looking closely at your coins, though unfortunately milk spots can also develop later.  And for that reason be sure to track down some good hard plastic capsules for the coins to protect them as much as possible.

This is a great series with some of the most inspired neoclassical art I have seen on coins, and I do hope the mint can get a handle on milk spots, which could turn off many buyers if the problem is not addressed.

The gold coins do not have any quality issues from what I have seen and heard.

**An earlier version of this article incorrectly stated that the ¼-ounce gold version was being discontinued for 2017.