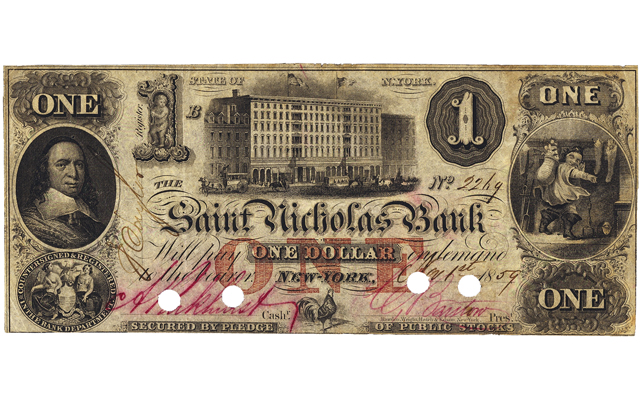 'Twas the night before Christmas, when all through the house

Not a creature was stirring, not even a mouse;

The stockings were hung by the chimney with care,

In hopes that St. Nicholas soon would be there;

The children were nestled all snug in their beds;

While visions of sugar-plums danced in their heads;

And mamma in her 'kerchief, and I in my cap,

Had just settled our brains for a long winter's nap,

When out on the lawn there arose such a clatter,

I sprang from my bed to see what was the matter.

The modern celebration of Christmas as a holiday, was formed in no small part on Dec. 23, 1823, when A Visit from St. Nicholas, also know as The Night Before Christmas, was published in the Troy Sentinel in Troy, N.Y.

The poem established that Santa Claus rode in a sleigh pulled by eight reindeer, magically rose up chimneys and carried a pack of toys for good little girls and boys.

Images inspired by the poem were placed on notes issued by more than 20 banks in eight states before the Civil War, when federal bills replaced privately issued bank notes.

One of the banks that issued Santa Claus notes was—not surprisingly—the Saint Nicholas Bank of New York City. When the bank became a National Bank during the Civil War it’s Santa vignettes dropped from circulation.

The Saint Nicholas vignettes on bills show Santa riding his sleigh, getting ready to go up a chimney, tiptoeing past a sleeping child and smoking his pipe.

“Since banks often chose vignettes that would lead customers to have faith in the bank, it is not surprising that Santa Claus vignettes were chosen by some banks to help acquire confidence and goodwill,” former Heritage Auctions cataloger Kathy Lawrence wrote in an introduction to the 2012 sale of Roger H. Durand Santa Claus Collection.

She noted,  “The banks may have also hoped that customers would set a lower denomination note aside as a keepsake due to the Santa vignette as well.”

The notes are wildly popular with paper money collectors, difficult to find and expensive. When the notes appear at auction, they regularly sell for thousands and tens of thousands of dollars.